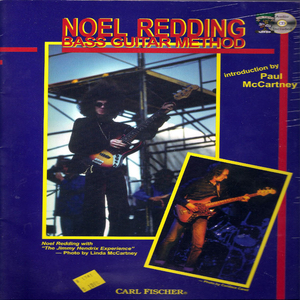 It's Getting Boring Says Noel The Red

A SLIGHTLY haggard Noel Redding staggered into the tavern and eased himself into a chair. Of course, it immediately crossed my mind that the poor ...

Noel Redding: I Dream Of Jimi

"THEY'VE gotta name for you people." Eric Bell settled back in a speeding Volkswagen as we wound through the West Cork countryside, and addressed the ...

IT IS INEVITABLE when dealing with such a visible force as Jimi Hendrix that persons who were close to him – and even played music ...

ROCK LYRICS aren't usually worth printing on the sleeve, but most bands display their adolescent poetry as if Homer played rhythm guitar, and Dostoyevsky was ...

Noel Redding Boxes His Own Experience

ASK NOEL REDDING what will be on the "new box set," and he won't offer any insight about the upcoming release that features dozens of ...

LET ME TELL YOU: The very first "real" concert I was ever allowed to attend as a wee Canadian tyke just so happened to be ...

NOEL REDDING (57) was found dead at his home in Clonakity, Ireland on May 11. No cause of death has been reported. He ...

MY FIRST TRIP to the U.S. for the New Musical Express was with The Jimi Hendrix Experience for the Monterey Festival. So the sad death ...