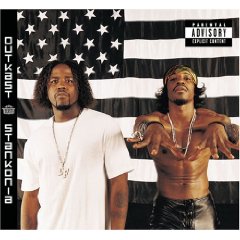 THE LAUREL And Hardy of phuture rap ...

The flamboyant Mr Benjamin on Stankonia, the influence of Brit dance music, meeting Big Boi, early influences and much more.

LaFace's latest rap group is climbing the charts and having a 'Player's Ball' ...

OutKast In The Promised Land

FINAL EXAMS AT Morehouse College were a bitch. Nearly four in the morning on a starry autumn night years ago, I found myself making a ...

OutKast: Blast from the Kast

ECLECTICISM IS NOT usually associated with hip hop. Most artists, especially those who sell, want to maintain their base, yet in an effort to keep ...

The Way They Are: Eminem and Friends

HIP HOP, you don’t stop. Whatever it is that this hybrid of street poetics and processed beats represents for modern culture, it ain’t going away. ...

They claim to be outsiders, but psychedelic southern playas Big Boi and Dre are already two million LPs ahead of the rap competition. ...

Profile and Interview by Paul Lester, The Guardian, 18 May 2001

One of them is a blonde-wigged, teetotal vegetarian who reads Pushkin. The other breeds pitbulls in his spare time. Together they have been called the ...

REMEMBER WHEN hip-hop shows were sloppy mishmashes of mistimed records and ten people bellowing at once? ...

The organizers of Audiotistic expect 37,000 fans to show up for an event that plays against type. ...

WE ARE ROLLING in a ridiculously immaculate Land Rover beneath a calm Atlanta skyline just after sunset. ...

OutKast: Speakerboxxx / The Love Below

For ten years hip hop duo OutKast have crafted wild, genre-defying music. Now, following their 2-CD masterpiece, it looks like that relationship might well be ...

THE YIN AND YANG of epicene dandy André 3000 and straight-up, pit-bull-ownin’ Big Boi may yet prove OutKast’s undoing. If so, the duo at least ...

Outkast are a rap act like no other - as interested in Kate Bush as in hardcore hip hop, and as likely to be found ...

Outkast: It's a Double Standard, Kemosabe

Whatever led André to think that even an inkling of "redface" would be any more acceptable than blackface minstrelsy has been to Americans of African ...

ANYONE FEARING that the Day-Glo brilliance of 2003's triple Grammy winner, Speakerboxxx/The Love Below, might have marked the height of the Atlanta duo's R&B powers ...

After their last album suggested a split, OutKast get it together again in spectacular fashion. Just don't call it a comeback, says Angus Batey. ...

An Album of the Year 2000: OutKast: Stankonia

WHAT INITIALLY seems like a throwaway title of nonsensical playfulness is actually a very astute summary of the first truly great rap record of the ...