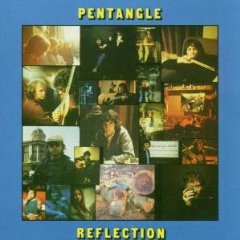 The Many Talents Of The Pentangle

Profile and Interview by Karl Dallas, Melody Maker, 18 May 1968

A BRILLIANT second album from the Pentangle and, being a two-record package, gives full rein to the group's tremendous ability, fine musicianship and remarkable flexibility. ...

SUNDAY'S LYCEUM played host to two reputable acoustic groups, Pentangle and Magna Carta. Which is great if you join the hard core of enthusiasts at ...

Pentangle: Four plus one

FOR A WHILE NOW there has been something of a quiet backlash in pop music. It started long before Crosby, Stills and Nash began charming ...

Crossing The Border: The Pentangle Interview

Interview by Rick McGrath, The Georgia Straight, May 1970

PENTANGLE? SURE. I knew Bert Jansch from my folkie days, and I knew he had an influence on Donovan... Given their dedication to "pure" celtic ...

Live Review by Philip Elwood, The San Francisco Examiner, 30 May 1970

Pentangle holds up its half of show ...

DECEMBER, ASIDE from its obvious festive revelries, has also been notable for the temporary withdrawal of the Pentangle. In the meekest possible way they have ...

The Five Sides of Pentangle

PENTANGLE'S RISE in popularity has been unobtrusive but definite. They play a unique and compelling blend of styles spanning the world of jazz, blues, country, ...

FOR A NUMBER of reasons Pentangle's Albert Hall concert last week was disappointing and when they brought their final number 'Pentangling' to a limp conclusion ...

THE APPEARANCE on the display wall of my favorite local record merchant of Pentangle's fifth album, Reflections, triggered a lightning search of my wallet, pockets, ...

Where Are They Now? Pentangle

EVEN BEFORE Fairport Convention had set their wheels in motion, Pentangle were attempting to contemporise and explore British folk music. ...

Pentangle: The Time Has Come

Profile and Interview by Nick Coleman, The Guardian, 16 March 2007

Folk pioneers Pentangle recently played together for the first time in 30 years. This is the perfect time for them to reform for good, says ...

OF ALL THE British folk groups of the late '60s, Pentangle were the most commercially successful. Where Fairport Convention and Steeleye Span chose a more ...