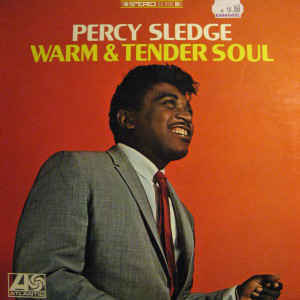 PERCY SLEDGE is here for a three-week tour, and to coincide with it Atlantic have released a single, 'True Love Travels On A Gravel Road', ...

The sould legend from the Quad-cities, Tri-states area on Otis, Bobby Womack, his love of country music, and the making of the National Anthem of North-West Alabama, 'When A Man Loves A Woman'.

The late, great Percy Sledge looks back at his Alabama youth; cutting the classic 'When a Man Loves a Woman'; the great songwriters and musicians – Dan Penn, Spooner Oldham et al; and talks about his favourite singers and his love of country music.

Plenty of tips, including a new Stones. Many follow-ups which aren't marvellous, and some outsiders, including Percy Sledge and Jimmy James and the Vagabonds ...

TIME WAS when the biggest stars of show business had names like "Rock Stone" or "Lex Treason" — strong, rugged names that helped to give ...

Profile and Interview by Derek Taylor, Disc and Music Echo, 28 May 1966

Special from Tracy Thomas in Hollywood ...

IF NOTHING else 1966 has certainly, so far, been a time of exciting new changes and discoveries in the ever-expanding R&B world. At last people ...

A multitude of newies this week including Presley, Dylan, & Beach Boys ...

THREE YEARS ago an unknown singer recorded what was to become one of the greatest soul ballads of all time. ...

PERCY SLEDGE made a fleeting visit to London recently on his way to Holland to receive an award. Naturally, B&S got together with him and ...

THE SIMPLISTIC idea that the fundamental difference between country and soul in the Sixties was that one music was made by poor whites in the ...

501 Ways to Leave Your Lover

The only definite sighting of PERCY SLEDGE in recent weeks has been in the UK Top Ten. BARNEY HOSKYNS reviews the career of the elusive ...

ON FRIDAY, DECEMBER 8, 1967, THE MACON, GEORGIA, office of Phil Walden and Associates, management and booking agents, was thronging with the most heavyweight soul ...

Out Of Left Cotton Field: The Brokenhearted Country Soul Of Percy Sledge

PERCY SLEDGE IS as prone to romanticizing Muscle Shoals as the many music writers who rhapsodize about the area in pieces about local luminaries like ...