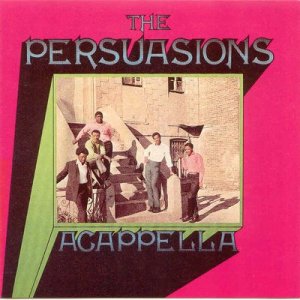 IF YOUR friends are going to think less of you if they see you floating two feet above the ground with a silly grin stretched ...

THE MUSIC-BUYING public (which has something – how much or how little is a matter of opinion – to do with determining the trends) can ...

The Persuasions: unreliable musicians led them to sing a cappella

THE PERSUASIONS are unique. They are, in fact, the only full time professional exponents of Accapella in the States. Accepella is the art of musical ...

THE PERSUASIONS ceased to be a pleasant, though strange, acappella curiosity with their last album, We Came to Play. That album took a more pop ...

THE PERSUASIONS are a five-strong black vocal group who perform acappella. Their album Street Corner Symphony is just what it says: a set of songs ...

The Persuasions: Spread The Word (Capitol)

GHETTO KIDS don't have parents who can spare a few hundred dollars for an electric guitar like their suburban counterparts. But they do possess an ...

WE'RE BACKSTAGE at Birmingham's Odeon, logjammed into a feeble grey van – a constable and sergeant at the controls – and now we're going to ...

The Dying Art Of Friendly Persuasions

Profile and Interview by j. poet, San Francisco Chronicle, 7 May 2006