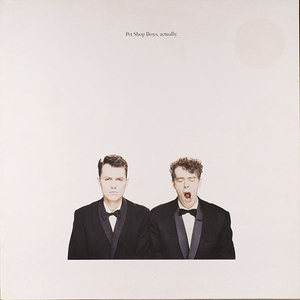 Report and Interview by Stephen Dalton, Times, The, 3 September 2004

Potemkin and the sound of a Pet Shop Boy ...

You saw Prince. You heard Frankie. You felt the warmth of Wham's sun tans. You watched the TV show but now read THE FULL STORY! ...

The Pet Shop Boys: An ex-Smash Hits Writer and the Grandson of a Nitwit

Doesn't sound like the ideal line-up for a successful pop duo, does it? But now that 'West End Girls' is whizzing up the charts that's ...

England swings to the yawning sound of the suburbs, where Dynasty kids dream of escape and fortune. DON WATSON reflects on the hit and myth ...

THE ART of the re-mix was perhaps debased forever by the whole Frankie fleece-the-punter exercise. Re-mixes have subsequently come to be cold-shouldered to isolated corners ...

LEAFING IDLY through the pages of last year's diary – recalling his early adventures in the wonterful world of pop – Neil Tennant arrives at... ...

JON SAVAGE takes a sceptical look at the BPI Awards ...

The Pet Shop Boys have played live once, never toured and only grudgingly socialize with the pop fraternity. They've stoutly refused to take the conventional ...

All Eyes Are On Liza

"My whole life I've sung songs that were written before I was born." But no longer. Liza Minnelli, Oscar-winning superstar, talks to Adam Sweeting about ...

THE LAST time Ms Minnelli did anything of note was at the start of the decade. Her portrayal of shoplifting Linda, the object of Dudley ...

DURING LAST YEAR'S concerts, Pet Shop Boys reserved a moment amidst the costumes and the dancing for an intimate spell at the piano with Neil ...

THE VEXED QUESTION is: what do we expect of The Pet Shop Boys? We expect, perhaps, in no particular order: excellent tunes, impossible-to-forget hooks; wry ...

OCCASIONALLY, WHEN they feel like it, the Pet Shop Boys take great delight and perverse pride in portraying themselves as the most preposterously pretentious pop ...

UNLESS ELVIS Presley reappears in Las Vegas, the curiosity and expectations that preceded the Pet Shop Boys' first American tour are unlikely to be equaled ...

"WELL, MY mother would agree with you," says Neil Tennant after. "She doesn't like the first half either." ...

THANKS TO INNOVATORS LIKE Kraftwerk, Cabaret Voltaire and the Human League, alongside the huge leaps made in drum-machine technology by the Roland corporation, musicians finally ...

What is it like, that magical moment when the creative juices start to flow? Is it one glorious spurt? Or merely a dutiful grind? The ...

Hate: Neil Tennant on the Power of Negative Thinking

IF NOT FOR hatred, I wouldn't be doing what I do now. I became a pop star because I hated football at school. I hated ...

The Smiths You Can Dunce To: Pet Shop Boys

WELL, HONESTLY! They're like an old married couple at times: Neil Tennant will poke fun at Chris Lowe, and Chris will get mildly stroppy in ...

MTV Launches in Russia - and the PSBs Cut the Ribbon!

Report and Interview by Dave Rimmer, Guardian, The, June 1993

2002 NOTE: This piece about the launching of MTV Russia was published by the Guardian in London, by Tip magazine in Berlin, and by the ...

NEXT YEAR Neil Tennant celebrates both his 40th birthday and the tenth anniversary of the first Pet Shop Boys record, 'West End Girls'. Chances are ...

A BANG, a crash, a highbrow cultural reference – and the best Pet Shop Boys album yet drops in for cream tea and scurrilous gossip. ...

THERE IS NO MORE embarrassing chapter in the big book of Pop Interview Ritual than the one in which you're forced to listen to music ...

HumanPet Shop Boys: proving there is life beyond irony ...

PET SHOP BOYS have become an institution. The quintessential '80s act, Chris Lowe and Neil Tennant have stuck to their guns and refused to defer ...

WHAT A SIMPLY spiffing party. The glint of expensive a jewellery, the waft of exotic perfume, the tinkle of erudite conversation "More cocaine, vicar? Help ...

AS REGENCY drawing rooms go, this one is on the largish side but, at first sight, perfectly ordinary.  ...

Review by Ian MacDonald, Uncut, May 2002

ON THEIR seventh album proper, PSBs go songful at home with Johnny Marr. ...

ON A BALMY summer's evening, the grounds of the Tower of London shudder to the art-disco thunder of the Pet Shop Boys' 1988 hit 'Left ...

THE PET SHOP Boys have been one of the most successful pop duos ever produced in this country. Twenty-one years into their career Chris Lowe ...

WHILE THE unexpectedly sharp return-to-form of last album, 2006's Fundamental, confirmed that the Pet Shop Boys should never be discounted, it's been more than a ...

NEARLY 30 YEARS ON, the Gilbert and George of pop are still charmers. Like two Planet Pop missionaries sent to cheer us up in the ...

Interview by Luke Turner, Stool Pigeon, The, May 2009

Latitude Festival Review: The Quietus Gets Saucy In Southwold

The Quietus bored by Yorke but tentage to Grace Jones, Pet Shop Boys and Nick Cave & The Bad Seeds at the driest wet festival ...

FIRST SEEN in Britain six months ago, the Pandemonium world tour feels even more dazzling second time around. Even though every pre-programmed note and choreographed ...