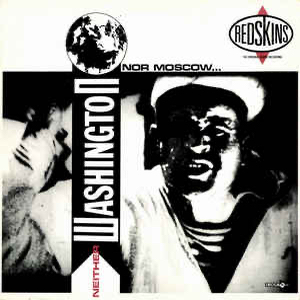 RIGHT TO Work Marchers, like punks, skins and soccer herberts, are apparently fair game for any Old Bill trying to keep his 'nick-nick' quota up ...

The Redskins: Keeping On And On

Adam Sweeting weathers a storm of political invective from THE REDSKINS ...

Red On Arrival: The Redskins

The Tube: Thank God It's Friday

MALCOLM GERRIE is the man behind Tyne Tees' groundbreaking pop TV show The Tube. Lynden Barber went to Newcastle to investigate the programme and its ...

The Redskins: The Insanity Clause

Back on the road and with their new single 'Bring It Down' receiving accolades from all directions, THE REDSKINS are demonstrating that there's still life ...

* William Shaw Sympathises With... The Redskins

* They think Live Aid is sickening* They reckon the Queen must feel a complete wally"* They want to bring down "post-war consumer capitalism"* They're ...

THE ONLY soul we got tonight was the pre-gig tape, sublime Seventies slices of Billy Paul, Fontella Bass, Womack... Personally, I was grateful — I ...

The Redskins: Acne In The UK

Kicking and screaming into '86 against injustices to the oppressed and themselves come THE REDSKINS. JACK BARRON explores the left side of their collective brain ...

The Redskins: Neither Washington Nor Moscow (Decca FLP I)