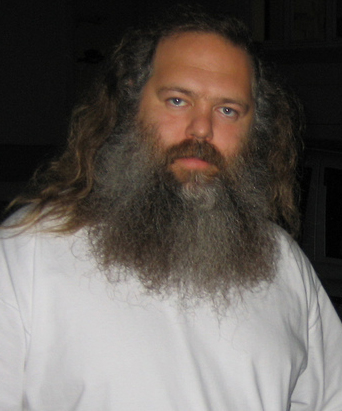 Rick Rubin by jasontheexploder (CC BY 3.0)

Beelzebub or Midas? Def Jam supremo RICK RUBIN walks the fine line between brilliance and stupidity. JACK BARRON joins him on the tightrope and enters ...

From rap to metal, LL Cool J to Slayer, producer Rick Rubin has shaped the definitive street beats of the decade. Paul Elliott hears the ...

Five years ago RICK RUBIN was the 21-year-old student behind Def Jam — the label that brought you the twin rock-rap assault of Licensed To Ill and ...

Rick Rubin: The Buddha of Suburbia

Rick Rubin built a recording empire from a dorm room at NYU. With Def American Recordings, he's taken the sound of the streets to the ...

The influence of the crush grooves produced by Def Jam and American Recordings founder, Rick Rubin, are stronger than ever. ...

From Beastie Boys to Run-D.M.C. to Red Hot Chili Peppers to Johnny Cash, he's produced them all ...

Rick Rubin: The Man Who Made The Chilis Hot

Report and Interview by Robert Sandall, Daily Telegraph, 4 May 2006

As the Red Hot Chili Peppers release a monumental new album, their producer Rick Rubin tells Robert Sandall how he tamed one of pop's most ...