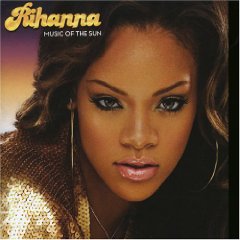 THINGS have moved fast for Rihanna since the Caribbean club strut of her debut single, 'Pon De Replay' became the car window shaking sound of ...

SOMEONE, somewhere is suddenly taking Rihanna a lot more seriously. Maybe it's the consistency with which her short career has delivered hits — step forward ...

Profile and Interview by Dorian Lynskey, The Guardian, 23 May 2008

ON A HOT spring day, inside a large, airy studio in the town of Castaic, California, a group of men and women are watching paint ...

She's transformed into a revenge-hunting, firebrand diva — and it suits her. ...

She's transformed into a revenge-hunting, firebrand diva — and it suits her. ...

THE SHOWBIZ SCANDAL OF THE YEAR was given a public face this Spring as pictures leaked out of the injuries Robyn Rihanna Fenty had sustained ...

IN NO OTHER field of music does the autobiographical imperative wield as much power as it does in R&B. ...

IF 2008 WAS the year in which Rihanna consolidated her status as a global pop phenomenon and 2009 the year that she came back stronger ...

Rihanna gives Lady Gaga a run for her money with sassy new album ...

RATED R FOUND THE Barbadian well pissed at Chris Brown and out for revenge to disappointing results. Loud seemed to find the middle ground behind the bucolic Rated ...

Provocation for Profit? Assault as a Marketing Accessory? Why the Rihanna PR Machine show sad signs of our times ...

Six months ago Rihanna looked like she was losing it, and now she looks to be in complete control. ...