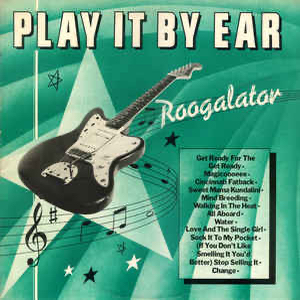 NICK KENT feels the hot breath of London's hottest new band brush his ear, and appraises the fine and diverse arts of Roogalation. ...

Special report from the first European Punk Rock Festival in the South of France by CAROLINE COON ...

THIS ONE takes place in Fulham Town Hall and a glance tells you whoever designed this place had his sights firmly set on Cummerbund City. ...

"It's true" says reader Giovanni Dadomo of Kings Cross, "I was an old fart until I discovered Roogalator. "Now I'm a young fart!" ...

THIS LEAD singer, John Joe Janies Campbell, looks ridiculous. Not because he's got green pubes or anything, he just moves funny onstage and grins all ...

Roogalator: Play It By Ear (Do It)

A JINX HAS to hang over Roogalator, despite their having one of the great names. ...

IT'S EARLY morning on regional breakfast television, and the morning's entertainment includes a local performer who, with close to 40 years of experience behind him, ...