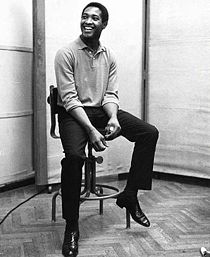 SAM COOKE is currently one of America's hottest disc properties. Since he scored his first hit with 'You Send Me', Sam has had a pretty ...

Sam Cooke: When you're well-read and dress like wham!

WE HAD the wireless on throughout. Sam Cooke wore red-patterned pyjamas, a black dressing-gown and a beaten gold ring, which he wears because he doesn't ...

WITH THE DEATH of Sam Cooke in Hollywood last Friday, the RCA-Victor label lost one of its most consistent hit recording artistes. ...

Sam Cooke: This Is Sam Cooke

SAM COOKE HAS always seemed, to me at least, the most underrated (or simply ignored – you don't really rate these people) of all the ...

Behind the Scenes with Harold Battiste

FREQUENTLY, we receive letters from readers' asking us to write about the people behind the scenes in our music. For example, the features we did ...

Sam Cooke: Who Remembers Him Now?

"NOT 'ALF Sam Cooke's been an influence on me," Rod Stewart was saying in his NME interview last week, adding that the inclusion of 'Twistin' ...

Sam Cooke: Twistin' The Night Away

BETWEEN 1960 and 1963 more Twist albums hit the market than the total spinoff products from Elvis, The Beatles and Jaws. ...

Sam Cooke: The Man And His Music

I SUPPOSE any Sam Cooke record is a gift from God, even an LP which fundamentally belies its title in the way this album does. ...

The deep and enduring influence of Mr Soul. ...

SAR was Sam Cooke's dream of an R&B empire. It nearly came true. ...

FEW ENTERTAINERS have fallen quite so far from grace as Sam Cooke did when he died, 30 years ago, at the Hacienda Motel in south-central ...

MOST OF SAM Cooke's pop hits were sugary, blanched affairs. This album was the real deal, giving us the church-reared R&B singer who liked to ...

THE TRAGIC DEATH of Sam Cooke remains one of rock and roll's great mysteries. Cooke was shot in the wee hours of December 10, 1964, ...

SAM COOKE WAS the first black American pop superstar. By 1962, the year of his biggest British hit, 'Twistin' the Night Away', he was the ...

Possessed of a purity of voice and an unerring sense of pop metaphysics, the incomparable Sam Cooke was a singer of soul and inspiration who ...

MOST EVERY single time the 20th century's greatest singer-songwriters find themselves getting lionized or even litanized, it seems one towering figure is strangely, sorrowfully AWOL. ...

As the Specialty label celebrates 75 years, Tony Burke talks to Billy Vera – singer, songwriter, and the author of Rip it Up: The Specialty ...