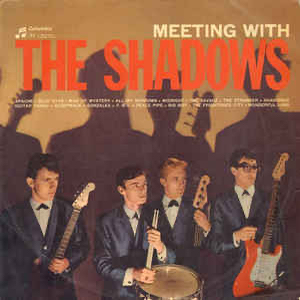 Another Hit for Cliff but This ISN'T Expected

CLIFF RICHARD, winner of eight of our Silver Discs, has another hit on his hands, and one he did not really expect. The number is ...

Tony Meehan: Why I Left The Shadows

I AM A FIRM believer in following the policy which maintains that, since life is so short, it is most important that one should do ...

First It Was Mrs. Kenny Ball, Now Norrie Paramor's Wife Picks A Hit For Her Hubby

PUZZLING, isn't it, that no one has thought of an award for the wives of hit parade stars — to be presented when they inspire ...

The Unseen, But Not Unheard Side Of The SHADOWS

The Secret That Cliff Can't Tell!

CLIFF RICHARD is, for sure, the most successful pop entertainer in Britain right now. But could it be that he is becoming more popular abroad ...

IT WAS BUSY-ness as usual for birthday boy Cliff Richard this week. On Sunday night he cut his next record (out in about three weeks) ...

Keeping it dark about the Shadows

The Shads have been a top international group for years, yet one of their secret fears is that they're not quite with-it. This got us ...

All About The World's Greatest Pop Show: 1966 NME Concert Mightiest Ever!

THOUSANDS upon thousands of fans converging on the massive Wembley Empire Pool for the biggest pop show in the world on Sunday... the staggering, the ...

ANATOMY OF AN ACT: THE FANTASTIC WELSHMAN COMMANDS THE PALLADIUM... ...

TO DEMONSTRATE to any potential unbelievers the importance of Hank B. Marvin, we must go back to 1977, when a TV commercial was screened showing ...

Hank Marvin: The King Of Twang

Raise your glasses to Hank B. Marvin: more than mere rhyming slang. ...

Four-Eyes, One Vision: The Shadows

BRIAN RANKIN GREW UP IN NEWCASTLE: WHEN he was 16, in 1957, he travelled to London with his school friend Bruce Welch "in an attempt ...

FOR MOST PEOPLE OF 40 AND UNDER, British pop begins with The Beatles: this is the view that has been encouraged by rock writers ever ...

The Shadows: Let's Go To Work

TONY MEEHAN, 15, is kicking his heels in Kilburn one late '50s afternoon when his friend Dave Rees suggests a trip to Soho. He may ...

The first and greatest bass guitarist of the Shadows, he also topped the charts with drummer Tony Meehan. ...