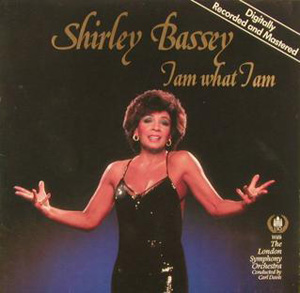 Can Shirley Bassey Make It Three Show Hits In A Row?

NO DOUBT about it, show tunes seem to have hit written all over them for Shirley Bassey! Her latest is 'Tonight', now in its second ...

Shirley, These Gowns Are Just Great!

TOMORROW (Friday) Shirley Bassey will appear at a special concert in Washington before President Kennedy to mark the anniversary of his inauguration, the first time ...

EVERY NOW and again a song is written that is so excellent that many artists rush to make their versions of it. A battle usually ...

PETER JONES TAKES A LOOK AT THE SUDDEN INFLUX OF THE BIG HIT GIRLS ...

HOW PEOPLE love Shirley Bassey! There's not another female singer in Britain, nay, probably the world who gets from her audiences so much love. ...

Shirley Bassey: The Soul Of Showbiz

EVEN BEFORE she stuck out her bottom and waggled it provocatively at the crucial moments on 'Big Spender', yes, even before she and Eartha Kitt ...

UNEXPECTED, but marvellous – and Shirley Bassey puts down her latest recording success, 'For All We Know' down to a change of style, which she ...

SLIDE UNDER the floating haze of perfume, cigar and flower fumes. Duck from the champagne bottle corks bulleting through the air, and join me in ...

SHE REALLY is something special... Our Shirl. In an age of mediocrity, the spectacle of an artist who can do his or her job with ...

TWO BOUTS of middle-aged hysteria within the space of seven days is surely almost more than the body can decently stand. Still shell-shocked from religious ...

SHE MAY BE OLDER than John Prescott and camper than Liberace, but Dame Shirley Bassey's sold-out homecoming show in Cardiff on Tuesday was greeted with ...