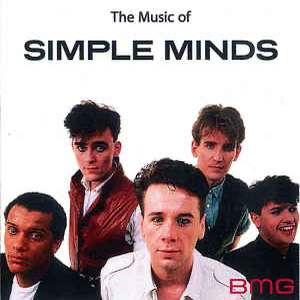 ONETHIS RECORD is something of a glow. Whatever your preference you will find it memorable and instructive. Find its qualities and fix your place. Be ...

The Simple Minds frontman expounds on such subjects as latest album Street Fighting Years; writing political lyrics and taking political stands; and how travel has informed his life from hitch-hiking as a kid to touring the world.

SIMPLE MINDS were fidgety as they sat around the kitchen table, some of them exhaling long streams of cigarette smoke while the others rattle boiled ...

I'VE NEVER BEEN this goddam excited about a rock'n'roll band for ages. The monster media called NEW WAVE is almost finished and the climate is ...

Simple Minds: Not as simple as all that

Simple Minds talk to DAVE ("we hoped it would someone nicer") McCULLOUGH ...

I'M DANCING as fast as I can! Empires And Dance, an LP of terror-songs, vigilance and vanity, starts with 'I Travel', one of the great ...

ONCE YOU get onto the European mainland, it's hard not to be infected by the virulent strain of fatalism sweeping the continent. En route to ...

BOTH THESE records explore the musical turf of brave new pop swathed in synthesizers and studio effects. Neither is quite a paradigm of such experimentation; ...

JIM KERR and I have just started talking over a cup of tea in London's Hyde Park, when a girl comes rushing up. ...

U2, Simple Minds, Eurythmics, Big Country, Steel Pulse: A Day At The Racecourse

A long, hot, emotional day it was too. Dublin's Phoenix Park throws open its gates to U2, Simple Minds, Eurythmics, Big Country and about 20,000 ...

SIMPLE MINDS: on the banks of a new gold dream? Or simply wet? DON WATSON fathoms it out with Jim Kerr ...

Simple Minds: Sparkle In The Rain

BARROWLANDS, THOUGH tacky and well-worn, certainly has a sense of history about it. Twenty years ago. The Stones played here on a minuscule stage. Ten ...

IMAGINE Rangers and Celtic combined, against Leyton Orient, for charity, in a hall the size of the Electric Ballroom. That's the sort of boiling partisan ...

Simple Minds: Do Not Disturb

Come to the heart of the Trossach mountains, breathe the fresh Perthshire air, and discover a troupe of weary travellers footsore from their labours upon ...

Profile and Interview by Phil Sutcliffe, Q, May 1991

"I ENJOY staying here," says Jim Kerr, the broth of his Glasgow accent as thick as ever. His upturned palms take in not only ...

MUCH HAS HAPPENED to Simple Minds since their 1989 album Street Fighting Years topped the album charts in nine countries. ...

IT COULD be coincidence that Simple Minds kicked off their first tour in three years in Seattle. Given the band's unveiling of a rougher-edged, guitar-based ...

IT'S OFFICIAL. Rock, that huge, lumbering beast we thought had been exiled to the sports stadiums of the American Midwest, is alive and almost kicking, ...

Return to electronic form for the New Gold Dreamers ...

IF THE YOUNG Jim Kerr; who fronted Johnny And The Self Abusers in the late '70s tailspin of punk, knew what fate had in store ...

Retrospective by David Stubbs, Uncut, May 2002

Retrospective and Interview by Gavin Martin, Daily Mirror, 23 May 2008

IT IS 30 YEARS since Glaswegian teenagers Jim Kerr and Charlie Burchill formed Simple Minds. In the years since, they have scaled the heights of ...

Simple Mind, Celtic FC supporter, fan of prog and proto-punk. Buys much of his new music via TV ads. ...

Simple Minds: "Maybe we shouldn't have cashed in…"

Retrospective and Interview by Graeme Thomson, Guardian, The, 23 February 2012

A COUPLE OF YEARS ago a young, anonymous musician approached Jim Kerr in a Glasgow rehearsal studio and began humorously haranguing him. "He was like, ...

THE INFLUENCE of Simple Minds is now a given. In deploying futurist gestures amid a communitarian ethic, the band's hallmark early-'80s work anticipated Arcade Fire ...