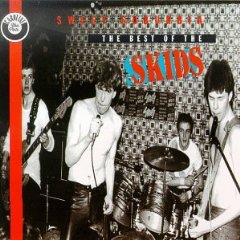 IF NOTHING ELSE, at least the sun shone undisturbed for the duration of the Stranglers' long-awaited London gig on Saturday afternoon ("They're trying to strangle ...

The Skids: No Comedy, No Intellect, No Politics, No Punk

GARRY BUSHELL INTERVIEWS THE SKIDS AND GETS CONFUSED (AGAIN). AN EVERYDAY STORY OF SCOTTISH LADS IN A POP GROUP. ...

The Skids: Scared To Dance (Virgin)

PREPARE yourselves for a thorny contender. The Skids are a relatively new four-piece from Scotland who, apart from their current single 'Into The Valley', have ...

The Skids: Theme For War Movies and Romantic Losers

Out of the Valley: The Skids Now

THIS WAS a feature that caused me innumerable problems. Not because I didn't know what to say, but because I had too much to say. ...

The Skids: A Loser's Quest For Survival

"I'm going to lose. It's like admitting defeat before I start. But I'm going to do as much as possible in that period before I ...

The Skids: The Absolute Game

BUBBLEGUM'S BACK and it sounds wonderful. In contemporary terms the Skids are to The Clash and the post-modernists what Sweet were to Slade and Bowie: ...

The Skids: Schizophrenia On Skid Row

"I've no desire to push myself into being a media figure. I'm quite happy with my cameras and my wife and my guitars."– Stuart Adamson ...

WITH THIS album (their fourth) the Skids have taken the final plunge of their career. From a pimply-faced four-piece with a great first album and ...

A Wee Look Back At The Skids