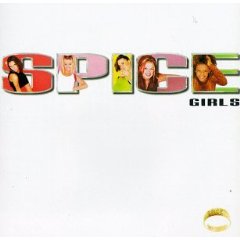 Taking On The Britboys: Spice Girls

Profile and Interview by Caroline Sullivan, Guardian, The, 26 July 1996

LAST WEEK, the world was as it should have been. Gary Barlow was number one, the summer's foreign novelty hit, 'Macarena', was panting just behind ...

THE PAY IS GOOD, the perks are fantastic, but there's one thing they never tell you about being a pop star – the hours are ...

THEY'RE NOT MANUFACTURED! They're not the female Take That! They drink, swear, shag and write their own songs! They believe in "girl power" and use ...

Larging it? I should zigah-zigah

Those who live their lives by the vocabulary of pop music are fated to repeat it. Sounds fair to me ...

The Spice Girls: The Notorious Zig-A-Zig-Ah!

THERE'S NO ducking it. The Spice Girls are undoubtedly the most successful British teenypop act. Their album, Spice, has sold over seven million albums in ...

Between the T-shirts, mugs, movies, dolls and video games, the Spice Girls have put out a new album. Caroline Sullivan didn't hate it... ...

You've quaffed the cola and scoffed the crisps — now read the review ...

AT THE end of the day, all they really, really wanted was to "zigazig ha". ...

The Spice Girls: We Have Come For Your Children

The Spice grip tightens. Nations and markets previously immune to their yelling, pointing, and possibly even their singing, have succumbed. So why are they suddenly ...

The tabloids have turned on them, their fans are leaving them — even Smash Hits readers voted them Worst Group. Is this the end for ...

The Spice Is Right: The Spice Girls: Spiceworld: The Movie

The Spice Girls: The Girls Can't Help It

Report and Interview by Jerry Thackray, Vox, May 1998

They were supposed to have sunk without a trace by now, but it seems that everyone still wants a piece of the SPICE GIRLS. Certainly ...

Spice Girls: Gone But Not Forgotten

Report and Interview by Philip Norman, Sunday Times, The, 21 June 1998

POOR GAZZA. Or should that be typical Gazza? Looking for a holiday destination as far from the World Cup as possible, he chooses the Ritz-Carlton ...

So Mel C thinks Geri H is untalented, does she? When girl bands break up, says Caroline Sullivan, the pops get personal ...

BOB HERBERT, who has died in a car crash aged 57, didn't invent the idea of the packaged pop group, but, as the man responsible ...

YOUR BAND may take a year off, but if you are a Spice Girl you just can't keep out of the headlines. ...

NEWS JUST IN: David Beckham has had a clause inserted in his contract with Manchester United which says he can become a free agent and ...

Melanie C has too much going for her to rejoin the Spice Girls. ...

The Spice Girls: It Was a Power Trip

Ten years after the release of the first Spice Girls album, our writer argues that the social legacy of "girl power" is still with us. ...