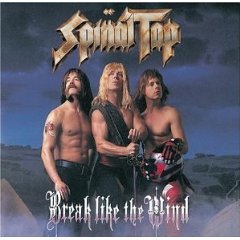 I LISTENED to some of it in my youth, but spent most of my post-teenage years trying to avoid this crap: pandering, patronizing, mono-dimensional, unimaginative ...

Trout farming, raising miniature horses, a theory about Stonehenge and his complicated relationship with David St. Hubbins: the Tap man tells all.

Review by John Mendelsohn, Creem, May 1984

THE MISSUS USED to be married to a little asshole who produced comedy specials for cable television. The principals of This Is Spinal Tap – ...

Spinal Tap: the Comics Behind the Funniest Rock Movie Ever

Remember The Bad News Tour? How The Comic Strip tore into the ludicrous excesses of heavy metal groups? ...

This Is Spinal Tap

Cynthia Rose shares a wake-up cuppa with Derek Smalls, Nigel Tufnel and David St Hubbins, the unlikely rockers who made it from New York back ...

Spinal Tap: This Much Talent!

This Is Spinal Tap: the movie that became a legend, the spoof band whose name became a by-word for all that is incompetent, disastrous and ...

Spinal Tap: This Much Talent!

2013 NOTE: This piece is slightly longer than the version that appeared in NME, since I took the liberty of reinstating a small handful of ...

...that brings East End boys made good SPINAL TAP back to the place of their roots. With the release of their first album in 10 years, Break ...

NO MATTER how witty they may be, few satires or novelty songs repay repeated listening. So how come a packed Wembley is rocking to the ...

THE BIZARRE blurring of the lines between comedic fiction and showbusiness reality continued apace with the staging of Spinal Tap's "One Night Only World Tour" ...