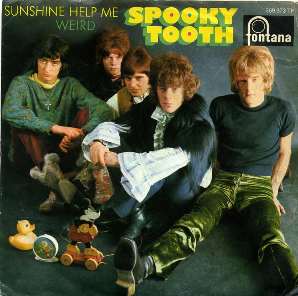 HEAVY STONED rock music, typified by intense, dramatic riffs repeated ad infinitum, or at least until the engineer cuts off the electricity. That's the impression ...

Albums from Spooky Tooth and the Stooges

Spooky Tooth: Spooky Two (A&M SP 4194) This is quite representative of the latest albums by unfamiliar British rock groups (in which category Free, ...

Report and Interview by Chris Salewicz, Let It Rock, February 1973

"OO WAS THIS cult then that dug us and never bought our records?" grunts Mike Harrison, singer and keyboards man with a much-loved and under-estimated ...

Spooky Tooth: You Broke My Heart So I Busted Your Jaw

SPOOKY TOOTH HAS suffered from every misfortune that can cross the path of a rock & roll band — among them, changing record labels, arrested ...

The Return Of Spooky Tooth