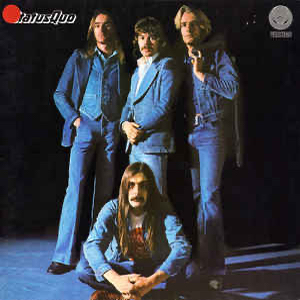 STRIDING into his road-manager's sitting room, Francis Rossi quips, "no comment " and then spins on his heel as if a fast retreat is on ...

Status Quo: In Search Of A Concrete Image

STATUS QUO are worried men. Their problem: a follow-up to their first chart hit 'Pictures Of Matchstick Men'. ...

Bubblegum Has Stuck To Status Quo, And It's A Stain They Need Ridding Of

IMAGES FOR bands are acquired, changed, but seldom forgotten – and such is the case with Status Quo. Underrated yet very talented, over a period ...

AS WE CRUISED TOWARDS GRANGEMOUTH in the Cracker-mobile, hoping for a day of peace'n'love near Falkirk, our suspicions should have been aroused by the RAC's ...

THE FACT THAT someone bothered to print the lyrics of Piledriver – there's a title safe from prosecution under the Trades Description Act – on ...

TONY STEWART GOES SWISS WITH STATUS QUO, WHO ARE BIG BUSINESS THERE ...

FOR A KICKOFF, let's get one thing straight: Status Quo's popularity depends not at all on critical approval or otherwise. Their audience at The Empire ...

I GUESS I ought to be grateful to Status Quo. If I hadn't heard this album, I wouldn't have thought of writing the "Heavy Metal" ...

FOR THOSE of you out there who are still wondering who Status Quo are, they are a rather heavy British band who, in the late ...

Would You Live Next Door To Status Quo?

A STATUS QUO recording session is an experience. What with furious neighbours bursting into the studio in the middle of "takes" and morse code messages ...

IN THE basement of a South London shop, a group rehearses. They're loud, ever so loud. A rat crawls from behind an amplifier, its ears ...

BY THE time you read this, Status Quo's new album and single should be riding high in the charts. You don't have to be an ...

THE STURICO security team didn't know what hit them. Lined up, muscles flexed, and ready for the worst, they were swamped by denim as soon ...

ALTHOUGH I IMAGINE it could be a disaster area if it rained, Cardiff Castle on a fine day is an ideal spot for a one ...

Rock festivals in Wales always tempt providence, as many a Marley or 10cc fan can attest. But at Cardiff Castle last Saturday, the sun shone ...

BETWEEN SEVEN and eight thousand fans queued for hours in the rain on Sunday, and then were individually frisked before they streamed into the cavernous ...

Retrospective by Pete Makowski, Sounds, 14 May 1977

"Status Quo are one of those peculiar groups who have been around for years and who go through cycles and surges of popularity that make ...

DEEP IN the heart of boogieland, as it were. Opening were the v. proficient, v. boring Nutz. I seem to recall hearing stuff from their ...

Status Quo: If You Can't Stand The Heat

WHAT IS beyond Status Quo, I often wonder? What is beyond tracks with titles such as 'I'm Givin' Up Worryin'', 'Gonna Teach You To Love ...

Status Quo: Whatever You Want (Vertigo)

Status Quo: Whatever You Want (Vertigo)

THE TITLE may be construed in some areas as Status Quo's capitulation to their critics, who've been claiming for donkey's years that the band's appeal ...

WILLIAM THE CONQUEROR was responsible for the construction of Lincoln Castle in 1068. In Victorian times it housed a prison, but now acts as a ...