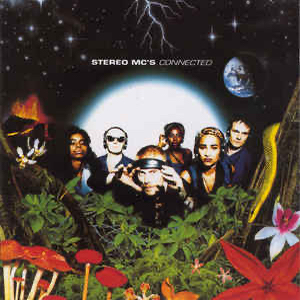 The Stereo MC's: "Lost" Cause

Refusing to bow to style trends or pigeon-holing, the stereo MC's insist on being judged on their music only  ...

High and Mighty: The irresistible rise of Stereo MCs

Are they Prince times six? A Sly & The Family Stone for the Nineties? The best "new" dance band in Britain? ANDREW SMITH flies to ...

THE STEREO MC's are all settled into their surprisingly comfy touring vehicle, headed up the highways (or whatever the British term is). On the road ...

Report and Interview by Steven Wells, New Musical Express, 15 May 1993

WITH THE ticket touts in the Manchester streets peddling their wares at up to £40 apiece, the Stereo MCs were unquestionably the hottest ticket in ...

Stereo MCs are already one of the biggest (dance) bands in Britain. By the end of the summer, after touring Europe with U2, unarguably the ...

"ARE YOU there, Milwaukee?" enquires a ghostly but undoubtedly English voice. It is around seven o'clock in the evening at the Marcus Amphitheatre in Milwaukee ...