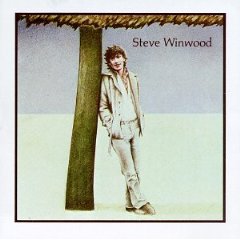 Steve Winwood: 'I'm Gonna Do an Album a Week!'

Report and Interview by Chris Welch, Melody Maker, 17 May 1973

IT'S BEEN MANY a long year since Steve Winwood has made impact as an individual on the English rock scene. ...

Winwood talks about the early days in Birmingham, from his childhood through to the start of the Spencer Davis Group, and thence to the stop-start life of Traffic, plus an overview of where he's at now

Player of the Month: Stevie Winwood

THERE COULDN'T possibly be a bloke who is more "in" than our Player Of The Month. Stevie Winwood has been called a prodigy, the English ...

When a bird like RAVE's Dawn James takes a close look at Stevie Winwood through the magnifying glass of a personal interview, she is surprised. ...

Stevie Winwood: Why I Quit

Steve Winwood says — Groups must play much much softer

"FREAKING OUT with volume is over. Everybody seemed to think volume was the revolution of the music. That's okay theatrically, but not musically." ...

WHAT A strange world it is. A couple of years ago this same double set was released in America, and swiftly withdrawn following objections – ...

Stevie Winwood: Not Just A Singer In A Rock And Roll Band

I MADE INITIAL contact with Stevie Winwood in March of 1966, a weekend rebel still in the high school clutches of suburban Boston. As was ...

Stevie Winwood: 'I'm Gonna Do An Album A Week!'

IT'S BEEN many a long year since Stevie Winwood has made impact as an individual on the English rock scene. ...

"STEVE'S only 25 you know. When people criticise him and say he's not as good as he used to be in the old days, they ...

MILES, our resident Grand Master of cosmic funk, unscrews the inscrutable and accompanies STEVIE WINWOOD and STOMU YAMASHTA into the infinite as they discuss, rehearse ...

THE THEORY of it could be a blueprint for the grossmost excess of pretentious rock – a fusion of cultures through music yet, Japanese, German, ...

Interview by Barbara Charone, Sounds, 7 May 1977

THE SIXTIES are very much alive in Ladbroke Grove these days. Tucked away in the back of Island's Basing Street Studios, swinging London gently reverberates ...

Steve Winwood Grows His Own

LONDON — AFTER an extended period of getting together whatever one gets together in the English countryside, Stevie Winwood, 29, has emerged with his first ...

Pop Royalty's First-Call Bassist Is Into More Than Keeping Time. ...

CATCHING PERFORMERS on the oldies circuit can be sad. ...

The Lord-Alge Brothers — The First Family of Engineering

HE SEEMS QUITE MONK-LIKE – steady stare, fish-pale complexion and a faraway look that, if I'd brought a compass, I could guarantee went in the ...

BACK IN THE EARLY '60s, in their Golden Eagle residency days, The Spencer Davis Group played the whole gamut of American R&B from John Lee ...

Interview by Johnny Black, MOJO, May 1997

IT WAS NOT UNTIL 1993, 30 years after he first heard Ray Charles sing, that Steve Winwood met his lifelong idol. Winwood happened to be ...

HIS FIRST ALBUM in six years finds Steve Winwood striking out in the direction of Latin America, using a core unit of jazz guitarist Jose ...

The blue-eyed soul voice behind the Spencer Davis Group and Traffic on jamming with Jimi Hendrix, the madness of Viv Stanshall and the problems of ...

The Lives of Steve Winwood

THE TITLE OF Steve Winwood's new album is Nine Lives – which refers to the number of songs the disc contains, but could just as ...

Eric Clapton: The Return of God

To the faithful, Eric Clapton's guitar playing has always been sacred. But in 2008, from a Blind Faith reunion to a host of blazing session ...

Empire of the Sun: Island at 50

The grand scheme of a gambler with a taste for chicken blood, Jamaican label Island Records introduced Bob Marley and U2 to the world. On ...

IT'S RARE THAT ONE mixes Aristotle with rock, but it was impossible to ignore a giant eye rolling on the back projection screen during 'Voodoo ...

Musicianship gets in the way of music as BBC studio with a great face for radio hosts revered veteran. ...