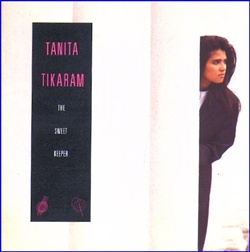 THE CONNECTION between pop stars and new towns in the Eighties – someone should have done a thesis on it. We had Depeche Mode in ...

Do Not Disturb: Tanita Tikaram

TANITA TIKARAM IS blessed. She has a voice which, on the evidence so far, is incapable of sounding unattractive; strong, low and husky, hinting at ...

AS EVERY HAIRDRESSER worth their shears will tell you, a radical change of hairstyle usually heralds an equally radical shift of persona. Tanita Tikaram's new ...

WHETHER IT'S by design or by some happy accident, Tanita Tikaram's third album finds the oddball girl-in-woman's-clothing locating her real voice at last. ...

THE STATISTICS — a number two album, world tours, etc — make it seem as though 1990 and 'The Sweet Keeper' were further TT triumphs ...

Tanita Tikaram: All Grown Up with Nowhere to Go?

TANITA TIKARAM DOESN'T think she is famous and can't bear to call herself a celebrity. ...

Tanita Tikaram: "I Was An Odd Kid"

SEVENTEEN YEARS AGO, during her first flush of success as a precocious young songwriter, Tanita Tikaram was lampooned by 'Smash Hits'. Under a photo of ...