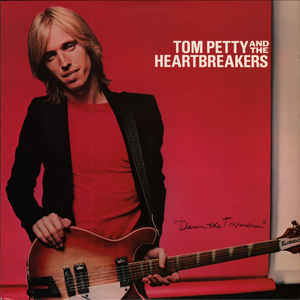 With his 1976 debut album, Tom Petty became a rock star. It seemed he was cast in the classic mould – a hip young American ...

Interview by Jaan Uhelszki, MOJO, May 1999

What's your fascination with San Francisco? Two years ago you staged 20 shows at the Fillmore, and now you're here for seven days. ...

The head Heartbreaker talks at length about, among many other things, songwriting and lyrics; his first album; working with Stevie Nicks; bandmates Mike Campbell and Benmont Tench; his Hard Promises album; Roger McGuinn's cover of 'American Girl'; Duck Dunn and John Fogerty; the MCA lawsuit and Denny Cordell; visiting Europe, and his relationship with producer Jimmy Iovine.

The Heartbreakers' main man talks about collaborating with other artists; the band's longevity; muses about songwriting and being a bandleader.

I LIKE THIS RECORD so much that I'd hate for a single person out there to miss out on it because of my failure to ...

IT'S NO accident that the tinny PA at the tacky Whisky was blasting out the Rolling. Stones' 'All Down The Line' prior to the Saturday ...

TOM PETTY HAS an obsession with rock 'n' roll. It's not just a glamorous occupation; it's virtually the only life the 26-year-old leader of the ...

IT'S BEEN a good two years since Tom's last sortie into the vinyl jungle, but even then You're Gonna Get It! was released to widespread critical apathy. ...

DAMN THE TORPEDOES takes the American Stand: "Don't tread on me" When you've been ‘raised on promises’ like the heroine of Tom Petty's bicentennial debut, ...

LIGHTERS COME on round the arena, a couple of firecrackers go off, then on strides Petty with his rockstar lope, leans into the microphone with ...

The Trials of Tom Petty: Petty gets it…

Washed clean by legal wranglings, Tom Petty is settling down to write good rock 'n' roll songs. "That's all I want to do," he tells ...

Call Tom Petty The New Springsteen And He'll Cut You!

THE PICCADILLY Hotel in Manchester is an anonymous modern structure slipped neatly inside a multi-storey car park — an injection of glass and concrete at ...

WITH THE release of 'American Girl' back in '76, Tom Petty asserted that ability to articulate a native territory – both inherited and imagined – ...

BENMONT TENCH remembers the day well. "It was April Fool's Day 1974 when we drove to L.A.," he recalls. At the time, keyboardsman Tench, guitarist ...

WHEN TOM PETTY burst into his manager's Sunset Blvd offices early this April he was exuberant. No wonder. He'd just finished mixing his fourth and ...

THE SPACE inside our souls where real dreams arise is created by a particular breed of gambler: the emotional, sexually aware, desperately honest human who ...

TOM PETTY and the Heartbreakers play a finely crafted band of meat-and-potatoes rock.  ...

Out In The Street: Bruce Springsteen, Tom Petty and the simple truths of blue-collar rock

In the heyday of Elvis, Chuck Berry or the Beatles, radio was revered. It constituted rock’n’roll’s channel to the teen heart, and it struck out ...

PRETTY SOON, it will be an established practice for earnest rockers to start off albums by announcing the circumstances of their birth. ...

Live Review by Charles Bermant, Globe and Mail, The, 1986

BOB DYLAN FORGOT a lot of the words to his own songs. He blew the payoff line of 'The Lonesome Death of Hattie Carroll' completely. ...

THE RECENT HBO cable TV special, Bob Dylan in Concert, gave us a sneak preview of what we can expect when Dylan arrives in Washington ...

ROCK HACKS aren't allowed near Bob. He's got no time for the press. In fact, someone who once met his grannie's dog-minder tells me Bob ...

Tom Petty: Once In A Full Moon

BY THE time Tom Petty became a Traveling Wilbury last year, he had every reason to stand shoulder to shoulder with the likes of Roy ...

HAVING LIVED next door to the Tom Petty Experience — a guy who strapped himself into his Strat to make up new solo parts for ...

WHAT CAN be said about Tom Petty and his crack band the Heartbreakers that hasn't already been said? They are quite simply the tightest and ...

Tom Petty & the Heartbreakers: Into The Great Wide Open

THE TITLE says it all. Space, horizon and all those rich possibilities are so central to the idea of America that it's hardly surprising they ...

HEIR TO DYLAN OR BEL AIR AIRHEAD? SOMETIME WILBURY TOM PETTY IS 40 WITH KIDS, AND EVEN THOUGH HIS NEW ALBUM WITH THE HEARTBREAKERS IS ...

IS TOM PETTY thrashing out a mid-life crisis or has he always been this way? His current show certainly leaves you wondering. American rock is ...

THE SURPRISING choice of Rick Rubin as producer after a highly successful liaison with Jeff Lynne over his last couple of albums might suggest a ...

Tom Petty: This Is How It Feels

"That's all we need is another dog onstage." Tom Petty's calm drawl has just gone as thick as black smoke from a smudge pot. Petty ...

Tom Petty & The Heartbreakers: Songs And Music From The Motion Picture She's The One

TOM PETTY WAS BORN to be a classic runner. The only question with each new release is whether he's out for a canter or the ...

Tom Petty & the Heartbreakers: Songs and Music from the Motion Picture ‘She’s the One’

Asked to provide one song for a film soundtrack, Tom Petty rather overshot the brief and wound up laying down an album’s worth. ...

AFTER MORE THAN FIVE YEARS OF THE IMMENSE SUCCESS THAT followed the popular breakthrough of Full Moon Fever, Tom Petty wondered what to do. His ...

FACED WITH the constant change and uncertainty that is life these days, it's a relief, on occasion, to be able to count on a band ...

BUSINESS AS usual for Petty is a decent business: good melodies, fat, ringing acoustics, his occasionally Dylanish delivery with those little lifts or drops at ...

ALMOST EVERYONE that knows Tom Petty for any length of time calls him Tommy. ...

On his third outing without the Heartbreakers, Tom Petty mixes nostalgia, protest and resignation to pay bittersweet tribute to his rock'n'roll radio roots. ...

This is the full, uncut version of the piece that appeared in Mojo, October 2009. ...