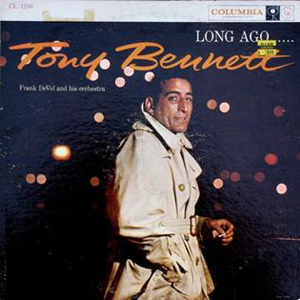 Anthony Dominick Benedetto on his album of Sinatra covers, Perfectly Frank; on being an interpreter; his passion to sing and paint; being named Bennett by Bob Hope; the influence of Bing Crosby, and the American Songbook; his love of bebop; "concept" albums, and recording with Bill Evans; his friendship with David Hockney, and on painting; the Forty Years box set; the changes in the music business, and his nostalgia for the old Miami and Vegas.

The American Great (and daughter Antonia) talk about Radio City Music Hall, the Great American Songbook, his return to the spotlight, his family and Depression upbringing, and a whole lot more, whilst tasting the delights of Teodora's cuisine.

PROBABLY the oddest chart story of the year lies behind 'I Left My Heart In San Francisco' — the silky, sophisticated Tony Bennett disc which ...

Tony Bennett: 'Paul McCartney Has a Spirit That Moves Me'

THOUGH THE MUSICAL approach of Tony Bennett – and the bands he works with, such as Buddy Rich – is not usually treated with adulation ...

Tony Bennett: "The Best Singer In The Business" — Frank Sinatra

TONY BENNETT has recorded eighty-nine albums in a career spanning more than three decades, all on Columbia records. But his latest effort, The Art Of ...

Tony Bennett: Rebirth of the Cool

TONY BENNETT is cool. I have felt this way since the early '60s. Sinatra was hip, but Tony was cool. He was a swinger singer. ...

Hi-De-Hi-Me To The Moon: Tony Bennett At Butlins

IT WAS AN ADVERT in a tabloid that caught my eye. "Lose Your Heart To Tony Bennett... Butlin's Super Weekend Break." Mesmerised, I read on: ...

THERE'S NO ONE so cold as a cold Italian, the saying goes. And as this lovingly crafted, four-CD boxed set demonstrates, there's none so warm ...

Collapsing stages in Japan! Elephant farts in Vegas! Eskimo shows in Alaska! A Survey of Abominable Venues and Disastrous Shows! ...

He wowed all at Glastonbury and is revered by everyone from Jarvis to Elvis Costello. Here's your ten-point guide to why you young whippersnappers should ...

FOR NEARLY 50 years, Bennett seems to have straddled two careers. ...

THIS IS HOW to do it. At 85, Tony Bennett scampers on to the Palladium stage in a perfectly pressed suit, a folded red hankie ...