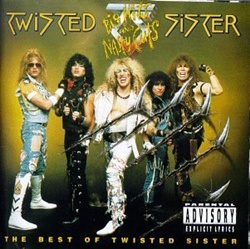 THERE'S A body of opinion that holds that Pete Way couldn't produce a rabbit out of a hat. There's a similar one holding that Twisted ...

OUT IN THE endless flatlands of Long Island's Suffolk County, where the traffic-clogged main streets are lined with every necessity for fast-food living and drive-in ...

A new generation of bands is dominating the charts ...

A LOT OF you younger readers who think that Boy George didn't invent rock 'n' roll androgyny believe that Prince did, or Michael Jackson, or ...

SOUND OF THE SUBURBS ...

THEY'VE HAD the best part of two years to think out a new game plan, yet Twisted Sister are still stuck in the Muppet metal ...

Taking their lead from their glam-rock roots, Twisted Sister went on to become one of the biggest bands of the 80s. In 1984, the band, ...

TIPPER GORE is showing way too much leg. The future second lady shimmies on both knees across a conference table, chest out, hips on a ...