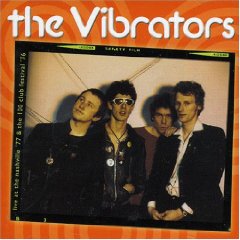 "I don't understand why people think it's so difficult to learn to play the guitar. I found it incredibly easy. You just pick a chord ...

THIS ONE takes place in Fulham Town Hall and a glance tells you whoever designed this place had his sights firmly set on Cummerbund City. ...

Punk and the Sex Pistols

BEWARE! WHEN Britain's biggest record company, EMI, and the Institute of Contemporary Arts, the citadel of the self-regarding avant-garde, unite behind a single idea within ...

OUT IN Twickenham, they haven't really made up their mind. ...

THE TWO-FINGER salute put in a surprise appearance at The Vibrators' gig on Sunday. Whether the dozen pairs of arms frantically waving V signs were ...

Punk: something Rotten in England

LONDON — British member of Parliament Marcus Lipton told his constituents that if punk rock was going to be used to destroy Britain's established institutions, ...

The Vibrators: The Punks Who Came In From The Cold

"I think I ought to make it clear", says Knox, arms waving like flags in a stiff breeze, "that when we first started we were ...

The Vibrators: The New Yorker, Toronto

THE VIBRATORS' first album, over a year ago, was a great disposable album of lasting significance. The short songs contained all the elements of great ...

CHARLIE HARPER is late, Charlie's always late. Me and Knox sit in the office cracking the usual jokes about it being his pension day. Not ...

'76 WAS PRETTY hairy. The anniversary headlines might read "1976, The Year Of Punk", but for most kids flares and long hair (still a sign ...