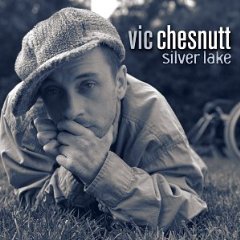 Chesnutt talks about Athens, Georgia; alcohol; his Is The Actor Happy album; the poetry of Stevie Smith and the writing of Flannery O'Connor, and his upcoming film debut in Billy Bob Thornton's Sling Blade.

Vic Chesnutt: And a Singer Grows

"I AIN'T NO fashion plate," singer Vic Chesnutt conceded when asked about the price tag on the collar of his thrift-shop Western shirt. "I just ...

Michael Stipe: What Are Friends For

2 SODA FOUNTAIN glasses full of strawberry-banana smoothie, a plate of nachos covered with melted cheese, a gorgeous Manhattan spring afternoon: what more could a ...

Vic Chesnutt: Is Vic All There?

Vic Chesnutt joins in his rock & roll heroes in the spotlight ...

Profile by Will Hermes, Village Voice, The, 24 November 1998

LIKE PLENTY of other folks in wheelchairs, Vic Chesnutt doesn't want your sympathy. In fact, he can challenge the compassion of even those closest to ...

THIS IS THE best record of the year at making time stop. Vic Chesnutt tells a story. Maybe the tale pulls into it specific figures, ...

EVERYONE'S FAVOURITE Georgia-based Paralympian once deadpanned to a Spin interviewer that "Vic Chesnutt is an autodidactically pretentious writer of pseudo-symbolic, text-centred dirge-ballads…singing in a distinctive ...

Vic Chesnutt: Dark Side of The Tune

IN 1983, VIC CHESNUTT, an obscure country misfit, was 18, drunk again, and crashing his car in America's southern state of Georgia. When he woke ...

Vic Chesnutt's back with three new albums in as many months…

Report and Interview by Wyndham Wallace, Quietus, The, 18 October 2009

He calls himself "the biggest fuck up in the music business" but, according to Wyndham Wallace, Vic Chesnutt is turning into one of its greatest ...