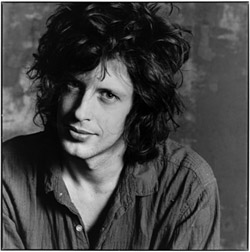 "I SOMETIMES thought that in the old days the young men of the tribe would want to grow up to be great warriors. In our ...

Mike Scott is definitely Trying To Tell Us Something, and he doesn't believe in whispering. With THE WATERBOYS' third album out, DAVID QUANTICK tries to ...

Something About The Waterboys

SUPPOSE FOR JUST a moment there was a fellow who named his band the Waterboys because "a Waterboy was something fluid and ever-changing" and also ...

THE CURE stepped boldly from the shadows to close the series of Sound Waves For Greenpeace shows with a towering set which lasted nearly two ...

That Sinking Feeling: The Waterboys: Room To Roam (Ensign)

OH DEAR. Let's establish this from the start. This is not The Waterboys' record we've been waiting for. This is not the way we wanted ...

ON THE Waterboys' 1988 tour, the stage was thick with musicians playing Irish folk instruments while leader Mike Scott hung back on acoustic guitar. But ...

Interview by Robert Sandall, Q, May 1991

"NOBODY SETS OUT TO BAFFLE PEOPLE; at least, I don't think they do." As general observations go, this sounds sensible enough, and it causes no ...

MIKE SCOTT, singer/songwriter and former leader of The Waterboys, gushes over his formative influences, from Gaelic roots to gospel, from Van Morrison to Dylan ...

When The Waterboys made This Is The Sea, it was described as an Astral Weeks for the '80s, and MIKE SCOTT was touted as the ...

Profile and Interview by Graeme Thomson, The Word, 2006

OF ALL THE PLACES to establish a spiritual community, one mile from a RAF base seems a trifle ill-conceived: transcendence must require every ounce of ...

The Waterboys: The Man In The Ironic Mask

Back with what's being heralded as their best album for two decades, the Waterboys have a busy year ahead. Mike Scott cracks a smile for ...

The Man In The Ironic Mask

BACK WITH what's being heralded as their best album for two decades, The Waterboys have a busy year ahead. Mike Scott cracks a smile for ...

The Waterboys: The Making Of 'The Whole Of The Moon'

"Big Music", a massive hit, and the anthem the band are still arguing about. ...

There's Something In The Water: The Waterboys' This Is The Sea at 25

Retrospective and Interview by Wyndham Wallace, The Quietus, 27 April 2011

Wyndham Wallace talks to Mike Scott of The Waterboys about his classic album This Is The Sea, 25 years on from its release… ...

The Waterboys: An Appointment With Mr Yeats

THOUGH MIKE SCOTT'S attempt to marry the poetry of William Butler Yeats to his own music has been promised for two decades, it offers neither ...

PRINCE HAS long been considered a gold standard as a singer, guitarist, stage performer, and producer. He's such a singular force, though, that he hasn't ...

The Waterboys: The Magnificent Seven

STILL FIRING ON ALL CYLINDERS after recording and promoting the acclaimed Fisherman's Blues, The Waterboys' leader Mike Scott was in no mood to rest on ...