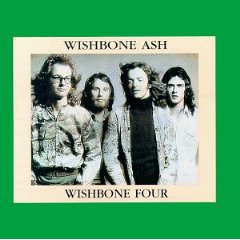 IT IS NOW ten months since Wishbone Ash packed up their troubles and settled in the USA, choosing a spot in Westport, Connecticut, that is ...

THERE IS NO doubt about it, over the last six months Wishbone Ash have developed into one of the finest loud, fast, rock bands currently ...

STEVE UPTON of Wishbone Ash. What sort of audience did he think the band had? ...

WELL, AS you may have guessed, a lot of us have fallen in love with this little band, and there are a load of reasons ...

WISHBONE ASH are without  a doubt one of our finest new bands — they make good albums, and their ever-increasing following is loyal. However, at ...

Wishbone Ash: A Surge of Greatness

Wishbone may seem to have suddenly emerged as this year's brightest hope but as with all overnight success it's been a hard slog. The wrong ...

JOHN PEEL: "I heard Wishbone Ash for the first time, and haven't been so impressed with a relatively new band for a long time. Their ...

Report and Interview by Chris Welch, Melody Maker, 6 May 1972

WISHBONE ASH are one of the nation's better bands. In the search for constant improvement, they have come up with a third album that many ...

Maybe if you're young enough, from a dreary home environment with nothing but a soul destroying future, then maybe you could enjoy a festival like ...

OF THE SCADS of similarities between Wishbone Ash and Yes, the most trivial and accidental (and so most interesting) is the fact that both groups ...

Top of the Polls with Twin Guitars

Interview by Simon Frith, Let It Rock, May 1973

ROCK WRITERS have a thing about genealogy. I don’t know who’s fault it is but I’m always reading about second generation bands and third generation ...

"IT'S GOING to be very weird going home to England, very weird," observes a suntanned, squinty-eyed Martin Turner. Wishbone Ash has been down here for ...

THE LONG BEACH ARENA, usually a noisy and vibrant auditorium for rock music, was just that Friday night when Paris, Wishbone Ash and Bachman Turner ...

Wishbone Ash: Return Of The Kings

Inside this otherwise quiet house in sleepy Connecticut WISHBONE ASH toil to produce the album that will return them to favour with the critics and ...

After deserting their homeland to live in the States, they're back — but they've not been forgotten… ...

"I SAW A band today that will give you guys a scare," someone told Andy Powell in the dressing room after a triumphant concert at ...

WHATEVER YOUR tastes in music, there's one thing you can never argue about. Audience reaction. A hall full of standing rock fans, clapping their hands ...

TIM LOTT takes off with THE MOTORS ...

ANDY POWELL AND Ted Turner's duelling guitars made this a band to be reckoned with 15 years ago – and gave Miles Copeland his first ...

A Tribute to Heroes! Ashbone U Wish do Wishbone Ash

I WILL NOT feign objectivity. When Wishbone Ash dissolved in 1977 because of the usual "creative differences" (Nigel and Steve wanted to be creative, while ...

Report and Interview by Dave Simpson, The Guardian, 18 August 2015

From Suzi Quatro to Saxon's Biff Byford, rock's pioneers have been making music for more than 40 years. Here they talk about leather jumpsuits, performing ...