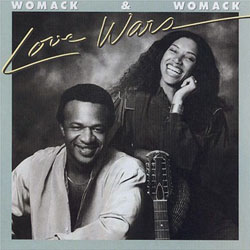 "ABSENCE MAKES the heart grow fonder", sing Cecil (brother of Bobby) and Linda (daughter of Sam Cooke) at the start of their epic 'Love Wars' ...

IT SHOULD really be no surprise that Cecil and Linda Womack's Love Wars LP is the most compulsive and acclaimed soul outing since the Marvin ...

Interview by J.D. Considine, Musician, May 1984

CECIL AND Linda Womack are sitting on a couch in their home near Philadelphia while Micah, their youngest, plays with a pull-toy on the floor. ...

YOU'LL BE hearing a lot of this on the wireless in the coming weeks if the Womack scam pays off. Radio M.U.S.C. Man "salutes all ...

GREAT SINGING is its own reward, and that's particularly true of the Womacks, Bobby, Cecil and Linda. Their voices carry not only the experience of ...

TEXTURING INTIMACIES with the grain of their extraordinary, conflicting voices, Womack And Womack have almost singlehandedly rescued the dramas and gestures of love from the ...

Womack and Womack: It's A Family Affair

The brotherhood lives on with Womack & Womack. Hugh Fielder finds it all very relative. ...

COINCIDENCE? WHILE searching around for my gig notes (it's been that kind of week) I turned up some notes on Womack and Womack's previous London ...

THE WOMACK FAMILY is giving the Jacksons a run for their money. Radio M.U.S.C. Man is, in fact, the most impressive musical reunion since the ...

Womack and Womack (and Womack): Bring The Family Back

Profile and Interview by David Toop, The Face, December 1985

BORN IN THE SOUL YEARS, SURVIVING THE LEAN YEARS, THE WOMACK FAMILY HAVE PUT A LIFETIME'S EMOTIONS INTO THEIR MUSIC. BUT CECIL AND LINDA WOMACK ...

THESE THREE records from the illustrious Womack clan — two from Bobby and one from brother Cecil and wife Linda (daughter of Sam Cooke and ...

THESE THREE records from the illustrious Womack clan — two from Bobby and one from brother Cecil and wife Linda (daughter of Sam Cooke and ...

Womack & Womack: Keeping It All In The Family

The next Womack and Womack LP is produced by the pair themselves, and features Cecil's three brothers and his ex wife (Mary Wells). Family ties? ...