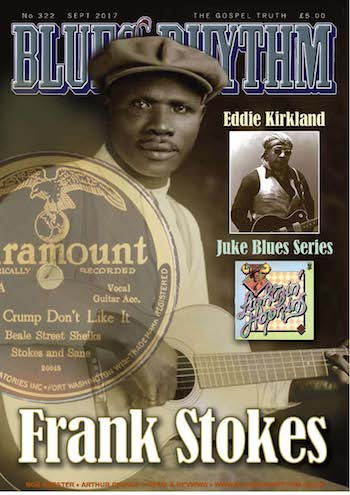 BIG NICKEL PUBLICATIONS continue their unsurpassed service of providing a mine of information to R&B record collectors with another addition to its catalogue of books, ...

ON OCTOBER 24th, 1988, Robert Cray played a sell out gig at the Manchester Apollo. He was riding high and on this extensive UK tour ...

Fats Domino: The Return Of The Big Beat: Fats Domino's I've Been Around – The Complete Imperial and ABC Paramount Recordings (Bear Family)

WAY BACK IN Blues & Rhythm 85 (published in January 1994), Tony Watson – in a special feature on the original Fats Domino Bear Family ...

LEE DORSEY, who died on December 1st, 1986, after a long and brave struggle against cancer and emphysema, will be best remembered in the UK ...

THE GREAT DEEP soul singer Doris Duke passed away on 21st March, 2019. The only mention I could find about her death is a reference on ...

IT IS PERHAPS fitting that the last CD of the Month for 1990 features a bluesman who began his recording career half a century ago ...

The Ace Records 4-CD B.B. King box set The Vintage Years was released in June 2002. This is the story behind the production of this ...

FOLLOWING RECENT reports of his serious illness, it came as little surprise to many blues fans that Memphis Slim sadly passed on of February 24th ...

DISCOVERIES MAGAZINE in the USA has called it "the single most significant blues music related discovery – ever. It is so deep and vast there ...

BACK IN THE mid-1960s, Wilson Pickett was one of my main men. A series of great singles waxed for Atlantic, including 'In The Midnight Hour', covers of ...

JIMMIE RODGERS is normally identified as the "father of country music". However, in the booklet notes to this two-CD, 46-track set, Hank Sapoznick argues a ...

Eddie "Cleanhead" Vinson: "Goodbye Mr. Cleanhead – things ain't what they used to be…" A Tribute to Eddie Vinson

EDDIE "CLEANHEAD" Vinson, who died on July 2nd at the California Hospital in Los Angeles after suffering a coronary and cancer of the throat and ...