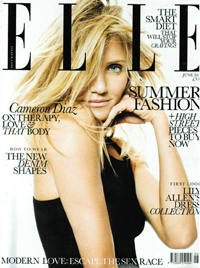 Elle is a the world's largest fashion magazine, headquartered in Paris, with over 40 international editions in over 60 countries, and more than 30 websites globally.

CLARENCE DEMONS is so big it's hard to imagine him standing in anyone's shadow. ...

The Noise From Brazil

MARCO AURELIO DA SILVA, known as Mazola, sits hunched over the console in one of Rio’s top recording studios, waiting for a live horn section ...