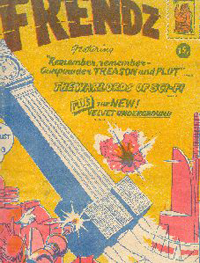 Frendz was an English underground magazine. Launched as Friends of Rolling Stone in 1969, it shortened its name to Friends, subsequently becoming Frendz in May 1971. It covered the politics and drugs issues as well as reflecting the underground music scene of the time. Frendz ceased publication in August 1972.

PROLOGUE – a true story: Mark, like most other 17 year-old boys, was going through the usual hassles which come with being young in the ...

WELL THEY started off as the original Richmond rough-house rock band and progressed through all the trends and bends and drug numbers and delicious outrage ...

BICKERSHAW, A SLEEPY little Northern town, had certainly never seen anything like it before. Coronation St had been invaded by the day glow kids and ...

AS I RECALL, it was the second week of July back there in 1970 — prime time for a righteous dose of dem ole Summertime ...

WELL, LET'S see, kids — it must be back there in 1969 that the name of Alice Cooper started to get around and gain a ...

SATURDAY NIGHT was star night down at the Rainbow Theatre in Finsbury Park and how! I mean, my dear, you just wouldn't believe all those ...