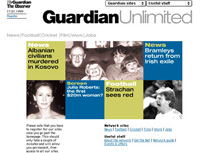 Guardian Unlimited wasthe name of the online edition of The Guardian newspaper , the daily newspaper published in the UK, now found at www.theguardian.com.

ROCK KILLS. The list of victims is too long and depressing to print here. We still raise an eyebrow when another tortured Narcissus bites the ...

WITH ALL THE current hoo-hah about how all gun crime in the UK is obviously caused by listening to gangsta chaps rapping about ho's and ...

IN THE EARLY 1970s, Keith Morris was asked to do a session for the first album with an unknown singer-songwriter, Nick Drake. Keith took a ...

PJ Harvey's White Chalk Is Genius With A Dark Heart

As the tracks unfold, Jude Rogers finds herself acting as Polly Jean's agony aunt while listening to her wailing like a Kate Bush from hell ...

Are Re-edits the Real Revenge of Disco?

Homemade, unlicensed reworkings of disco classics are taking over clubland ...

Last week's news that lots of Derbyshire tapes had been found and digitised marked the latest stage in her recovery as a musical, and feminist, ...

"I'VE NEVER HAD to say this to a crowd before," says Shawn Stockman, the tenor who puts a great deal of the quivering oomph into ...