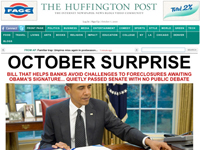 The Huffington Post is a liberal American online news aggregator and blog launched in 2005. It now has a number of international editions.

Van Dyke Parks remains in forward motion despite the fickle tastes of the Entertainment-Industrial Complex. An eloquent raconteur and great wit, he's philosophical about the ...

BY EARLY 1994, Grunge had already changed the mainstream musical landscape forever. At the decade's onset, the success of albums such as Nirvana's Nevermind and ...

The Beach Boys, The Byrds, The Righteous Brothers, Phil Spector: The Wrecking Crew Played On All Your Favourite '60s And '70s Songs (Seriously)

IN THE '60s and '70s, a should-be-legendary group of studio musicians dubbed the Wrecking Crew played on the era's defining songs. ...

Brits Are Still in Love with Rave Culture