Line of Best Fit, The 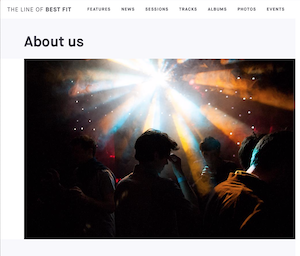 The Line of Best Fit is an independent online magazine based in London, concentrating on new music. It publishes independent music reviews, features, interview, and media. Founded by Richard Thane in February 2007 and currently edited by Paul Bridgewater, the webzine's name derives from a song on Death Cab For Cutie's You Can Play These Songs with Chords.

Reviews by the webzine have appeared in publications such as Clash, The Daily Telegraph, The Guardian, The Independent and NME. The Line of Best Fit also publishes music premieres, exclusive live performances, podcasts, and playlists.

The webzine has its own record label, Best Fit Recordings, and since 2015, has hosted its own annual music festival in London, the Five Day Forecast.

Electro-pop three-piece Vaults chat to us after shouldering the weight of soundtracking this year's John Lewis Christmas advert, one of 2016's most hotly anticipated releases. ...

Interview by Pip Williams, Line of Best Fit, The, 8 December 2016

Elder Island discuss the varied influences on their Seeds In Sand EP, including a much-missed feline friend and acid house vibes in their live show. ...

It's hard to review an album when your words just don't feel big enough. ...

Pop heavyweight JoJo reveals to Pip Williams some of the stories behind her third album Mad Love.  Covering everything from Wiz Khalifa to the serenity prayer ...

Linnea Olsson shares her own thoughts on every track of her new EP For Show, including the home-made stop-motion videos that accompany them. Overwhelmingly inspired ...

Cavegreen's Vita Lucida's only problem is being over too soon

Vita Lucida is the debut album from Washington-based duo Cavegreen, and comes following 2015's Journey of Return EP. The band is composed of Eleanor Murray ...

North Carolina electronic duo Sylvan Esso open up to Pip Williams about their sophomore record What Now, and plenty more besides. Ahead of today’s release, Amelia ...