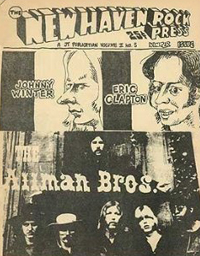 New Haven Rock Press was a fanzine started by writer Jon Tiven in 1967, in New Haven, Connecticut, when he was a 12 years old school boy. Around 20 issues were published until it closed in 1974.

Hammer was the first group to meet the Clapton-hungry crowd at the Capitol. They're a second generation San Francisco band of a vocalist who sings ...

THE ATMOSPHERE was a bit tense and strained at the Capitol this particular night as Columbia Recording Studios was recording all of what was going ...

DUANE ALLMAN and Berry Oakley are respectively, the guitarist and bassist for the Allman Brothers Band. Between shows at University of New Haven, I got ...

The Band, Seatrain: The Band at Central Park

ON THE night of June 29, The Band played to the biggest crowd in the four-year history of the now-traditional Central Park Summer Beer Festival ...

TIME AGAIN for one of those legendary matchups, a method which has in the past answered such immortal questions as: Could Eric Clapton shut down ...

I WALKED IN late, so for all purposes Foghat were the opening group. People take their album seriously because Dave Edmunds was involved with it, ...

PATTO MAY not be the richest and most famous band ever to step out of their rock 'n' roll shoes, but in my book they ...