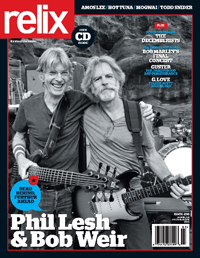 Launched in 1974 as a newsletter devoted to connecting people who recorded Grateful Dead concerts, Relix later expanded to become a general interest music magazine, focusing on live music including band interviews, and reviews of albums, music videos and concerts. It is published 8 times a year from New York, and is now accompanied by an online magazine.

Blondie: They're A Group! Not A Girl!

READING THE following interview, one might get a sense that there are two Marty Balins. ...

LUCINDA WILLIAMS is a little distracted. She keeps popping up from her seat, perched between the four overstuffed pillows that are arranged artfully on her ...

Interview by Alan Light, Relix, May 2011

ATHENS, GEORGIA IT'S 1995, maybe 1996. Brian Burton is a freshman at the University of Georgia, an aspiring moviemaker, taking an "Introduction to Film" course. Burton ...

TWO JUBILANT kids are dancing amid a gaggle of homegrown hippie girls in the wings of the Savannah Civic Center in Georgia. The Civic has ...

"WITH THE FACES, you never know what's going to happen." It's a theme that comes up again and again in conversation with Ronnie Wood and ...

OF THE DOZEN musicians who passed through the ranks of the Grateful Dead during their three-decade run, only one full-time keyboardist survives. Yet Tom Constanten, ...

"THAT'S SCARY, but don't worry," says the tarot card reader. "The devil is kind of weirdly positive, though it looks crazy." ...