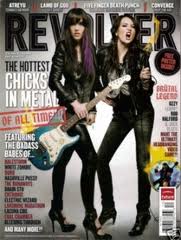 Launched in 2000, Revolver is a bi-monthly rock and heavy metal magazine published in New York. It is now accompanied by a online magazine.

The Doors Of Perception

It's the rock legend that everyone can recite by heart, but that no one can agree on. The surviving members of the Doors and their ...

SONGWRITERS from Chuck Berry to Paul Westerberg have written definitively about the adolescent experience long after their teen years were over. Although the mid-twenty-something Blink-182 ...

ON THE stroke of midnight, at an uber-groovy establishment in lower midtown Manhattan, an elongated 37-year-old Englishman is heading off to work. Or rather: easing ...

ANYONE FAMILIAR with the acclaimed documentary filmmaker Ken Burns (Baseball, The Civil War, et al) knows that this man is unafraid of tackling the most ...

BRIAN WILSON made Paul McCartney cry. The cute Beatle readily admits that the Beach Boys' Pet Sounds has, on occasion, made him positively weepy. Sir ...

Retrospective by Erik Himmelsbach, Revolver, May 2001

FEW INDUSTRIES RIVAL THE PEOPLE who bring you pinball machines when it comes to slavishly exploiting trends in popular culture. Back in the Forties, existing ...