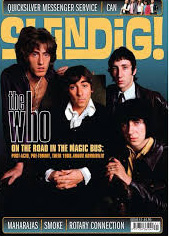 Founded in 2007, Shindig is an independent music magazine published monthly in the UK.

AT THE CLOSE of the '60s, the power of America's rock bible Rolling Stone was immense. Entire careers hinged on the opinions of the magazine's ...

Syd Barrett: Before The Void

2016 MARKS 70 years since Syd Barrett entered this world, ten since he left it and an incredible half century since Pink Floyd played their ...

LAST MONTH WE looked at Syd's childhood and the birth of Pink Floyd up to releasing 'Arnold Layne'. ...

Tim Buckley: The Dream Belongs to Me: The Tragic Journey of Tim Buckley

FIFTY YEARS AGO this month, an album was released that, in its own strangely magical way, managed to stand out among the recent folk boom ...

How a poor boy from Chicago became the voice of the civil rights movement in soul's greatest vocal group, defined the black pride anthem and ...

50 years ago, four musicians moved into a haunted Berkshire cottage. Surrounded by ancient sites and monuments, they ignited a unique musical melting pot that ...

VASTLY EXCEEDING his hopes when it was released that September, Curtis was greeted as the most exciting soul album since Isaac Hayes' Hot Buttered Soul ...

NOW WITHOUT any band at all, Island released Traffic's Last Exit in May, consisting of singles that ironically started with Mason's 'Just For You'. ...