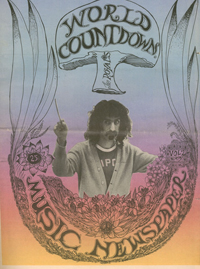 World Countdown News was a bi-weekly music newspaper published in Los Angeles, California between 1966 and 1969.

When Beatles press officer Derek Taylor swapped Swinging Britain for LA's Sunset Strip in 1965, he played a pivotal part in bringing the worlds of ...

ON July 25, 1966, the Buffalo Springfield had the distinction of being the first group ever to appear at a rock concert at the Hollywood ...

THE HOTEL CHESTERFIELD is not one of New York’s most majestic hotels, but it has a virtue prized by lyricists and tunesmiths for it is ...

FORMED ALMOST a year ago, The Wind in The Willows is a seven-member group from the New York area playing their own particular kind of ...

The Bloodless Battle Of The Badge: The Press at Monterey Pop

THE CLEAN YOUNG man at the window said he was from the Los Angeles Times and there was nothing in his face to say he ...

WHEN NILSSON was signed as an exclusive RCA Victor recording artist, Ernest Altschuler, Division Vice President and Executive Artists and Repertoire Producer, said: "He is ...