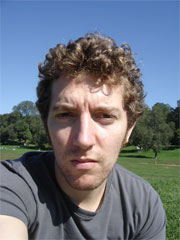 For four years, Andrew Purcell wrote BBC 6 Music's Gig Guide, earning a handful of admirers and a truckload of abuse for slagging off Keane, Kaiser Chiefs, Kasabian and the Killers, among others. In 2005 he moved to New York, resolved to do some proper writing again, and now freelances for the BBC, The Guardian, The Independent and The Sunday Herald. He has had the privilege of interviewing David Byrne, Johnny Marr, Dion, Arthur Lee, Ian Brown, Jimmy Cliff, Damon Albarn and Debbie Harry, and feels very lucky to have done so.

Report and Interview by Andrew Purcell, Independent, The, 12 April 2008

Profile and Interview by Andrew Purcell, Big Takeover, The, June 2006

ART BRUT'S guitars lean against gently buzzing amplifiers as the back room of Brooklyn's Sound Fix Records slowly clears out. The penultimate gig of their ...

The Black Keys: 'It's ridiculous to say that we play the blues'

Report and Interview by Andrew Purcell, Guardian, The, 9 July 2010

DAVID BYRNE KEEPS a small black diary on his bookcase, with 'DB – Idears' written on the spine in gold ink. Without rifling through its ...

JOHNNY CASH lives with his daughter. He's in the set of her jaw, the power of her voice, and he stares down proudly from every ...

Profile and Interview by Andrew Purcell, Independent, The, 12 January 2007

TWO YEARS AGO, Clap Your Hands Say Yeah proved that popular music's rules have changed. The old logic of rise and fall still applies though, ...

THIS AFTERNOON I will meet Ornette Coleman, the world's greatest living jazz musician. Coleman is an iconoclast's iconoclast, Lou Reed's hero, a saxophonist who plays ...

Dion: "I saw the devil himself"

He's been a doo-wop legend, a heroin addict, a protest singer and a Phil Spector protege: now Dion's a Grammy-nominated bluesman. Andrew Purcell met him ...

Profile and Interview by Andrew Purcell, Guardian, The, 2 December 2010

Johnny Flynn followed his childhood sweetheart to New York, then came back and fired up the English antifolk scene. He tells Andrew Purcell about a ...

The Good The Bad and The Queen, Gorillaz: Gorillaz

Profile and Interview by Andrew Purcell, Guardian, The, 27 February 2009

They thought he was mad, they spat him off stage, he hit the drugs... But Grandmaster Flash gave 'DJ' a whole new meaning. Andrew Purcell ...

Flash talks about his latest album The Bridge, but then takes us back to the Bronx in the mid-'70s, his technical innovations, experiences with Sugar Hill records, and his addiction and the lost years.

He has enjoyed electro, pop and funk incarnations but, as Herbie Hancock tells Andrew Purcell, it's all about playing one right note ...

The piano great on the great '63 Miles Davis Quintet, band democracy, Buddhism, commercialism and much more.

Report and Interview by Andrew Purcell, Guardian, The, 11 August 2006

Katie Melua wants to crack America. Andrew Purcell hears how she plans to do it — from playing to overexcited housewives to targeting chat shows. ...

A FEW YEARS AGO, Jeffrey Lewis wrote a song called 'Sal's Pizza Has Sold Out To The Yuppie Scum', complaining about the rising cost of ...

Profile and Interview by Andrew Purcell, Guardian, The, 11 November 2010

After years of honing their tight harmonies, southern Californians Local Natives are breaking out. But they've suffered a few comparisons too many. ...

The comedian/bluegrass picker Steve Martin talks about banjos, learning to play, his long association with the Nitty Gritty Dirt Band and more.

The National: Gloomy … with a Hint of Sunshine

Report and Interview by Andrew Purcell, Guardian, The, 22 April 2010

IT WAS PAST SIX in the morning, in the bar of Bono's hotel in Dublin. The members of the National and REM were seated around ...

Phoenix: By the Time They Get to… Phoenix

Report and Interview by Andrew Purcell, Guardian, The, 27 October 2009

THE BROOKLYN-QUEENS EXPRESSWAY is a miserable stretch of road. The BQE, as New Yorkers call it, has narrow lanes, no hard shoulder, countless potholes, and ...

"WHEN I FELT like I needed profanity, I used profanity," Swamp Dogg begins. And as he cheerfully swears his way through his 50 years in ...

TV on the Radio: TV On The Radio's Curse

Report and Interview by Andrew Purcell, Big Takeover, The, 12 October 2009

TV ON THE RADIO are victims of their own success. After three albums, they are indisputably the most critically adored band in the western world, ...

THERE IS AN anecdote that Rufus Wainwright enjoys telling about his childhood fascination with Judy Garland. "I wanted to be Dorothy – on good days," ...

Don't Mention The War – Unless You're Over 50

NEIL YOUNG'S latest album, Living With War, was supposed to be more than a collection of protest songs. To optimistic critics of the occupation of ...