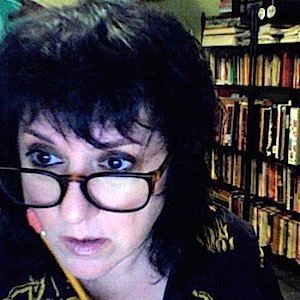 I really wanted to be a music journalist. As a hot-blooded teen growing up in Long Island NY, all I thought about was cornering my favorite bands and asking them relevant questions, dumbass questions, inflammatory questions. Eventually, I achieved this misinformed adolescent goal thanks to Andy and Glenn and the NEW YORK ROCKER.  They allowed me to learn on the job and bore them with my rants and theories. I'm sure the fact that I was a 21-year-old-punkrock chick who wore panties in public bought me a lot of leeway, but they didn't make a point of this more than 2 or 3 times a day. Eventually I also churned out unauthorized knock-off bios under a variety of pseudonyms for as little as $1500 a pop.

Living in London in the early 80s and working for the NME, I had a series of epiphanies including the big one:  I couldn't interview popstars for the rest on my life because I wasn't seduced enough by their talent to put up with the fact that most of them are dumber than a sack of hammers. It's a long story, followed by another and another.  But here we are you and I, at the end of this biographical letter.  I really wanted to be a music journalist, but I think such things are best left to others.

Aerosmith: Walkin' The Dogma (Can I Borrow The Karma?)

IF THE WASHINGTON Monument vanished tomorrow a sizable portion of the population would be suitably abashed, but if the darned old thing trickled away bit ...

SHAKING IT UP WITH DAVID (THE ARTISTIC ONE) AND RIC (THE TALL ONE) ...

Spandau Ballet: UP, UP and Away

Interview by Annene Kaye, Creem, May 1984

Rick Springfield: Are You Ready To Rick?

"All my girlfriends talk about is, like, how it would be to meet Rick and y'know, they talk about making out with him and stuff... ...