Betty Page is a pseudonym for Beverley Glick 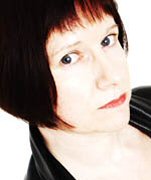 Beverley Glick first started writing for Sounds in 1979 under the pen name Betty Page (inspired by Bettie Page, the 1950s "Queen of Pinups"), and went on to make her name as the music journalist who championed the New Romantic movement, conducting the first major interviews with Spandau Ballet, Duran Duran, Soft Cell and Depeche Mode in the early '80s.

She left Sounds in 1982 to become features editor of the short-lived pop/rock colour magazine, Noise!, before becoming assistant editor of pop weekly Record Mirror in 1983, going on to become deputy editor, then editor in 1986. She quit to go freelance in 1989 and in the early '90s wrote for the NME and Vox.

In 1993 she left music journalism behind to enter the grown-up world of national newspapers, editing, writing and commissioning features at The Observer, The Sunday Telegraph and The Sunday Express.

She quit journalism altogether in 2014, starting a new adventure in the spoken word. She is now a public speaking coach and trainer, and also works as a clarity coach, helping small business owners improve their online communications.

Beverley has written a book about her adventures in '80s pop and is currently seeking a publisher.

In the fourth extract from my Eighties memoir, another brand-new pop group gets interviewed by Sounds' Betty Page, who is fast establishing herself as the go-to ...

Duran Duran: How I Discovered Duran Duran. Or Did They Discover Me?

In the third extract from my memoir Hit Girl: My Bizarre Double Life in the Pop World of the Eighties, I tell the story of my ...

Duran Duran: The day I discussed the meaning of life with Simon Le Bon

MY RELATIONSHIP with Simon Le Bon began back in December 1980, when I was a rookie writer for Sounds and visited the Rum Runner club ...

Bill Nelson: My Bizarre Double Life In The Pop World Of The Eighties

After a small ripple of public demand, I'm going to start posting a series of extracts from my unpublished memoir Hit Girl: My Bizarre Double Life ...

IN MAY 1983, when I was assistant editor of Record Mirror, my good friend (the late) Gill Smith asked if I would interview a new ...

Soft Cell: The Day Soft Cell Saved Me From The Dance For Perfection

In the fifth extract from my memoir Hit Girl: My Bizarre Double Life in the Pop World of the Eighties, I recall my first meeting with ...

Spandau Ballet's Bible: How I Played My Part in Inventing the New Romantics

Here is the second extract from my memoir Hit Girl: My Bizarre Double Life in the Pop World of the Eighties. It is September 1980 and, ...