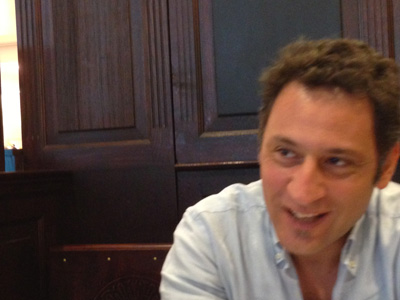 BORN ONE scorching-hot morning amidst the colors and sounds of the early 1970s, Francesco Calazzo, as per his own words, has been on a strict diet of pasta and Rock'n'Roll from a very early age. FC's started "communicating" his explosive presence early on his adolescence when he began spinning records for a famous Italian radio-station ("Radio Citta' Futura" in Naples). He was just 15 and many times he would skip school either to play his favorite music or to strum guitar in some local, and very obscure, garage (basement would be more to the point here) band.

At 18 (which come to think of it, it was a long time ago), after countless rock-bands with names rigorously starting with the article "THE", he went for Law School … only to discover, few years later, that his heart, and soul, was into journalism and media studies. That's when against the backdrop of the 1990s he decided to pack and go pursuing a formal education in Journalism in a country that he loved: the United States of America. Four years later and tenfold wiser, he became an alumnus of the Hunter College (City University of New York) a rock-journalist alma-mater in its own right.

From then on, Francesco has been keeping a steady and refreshing stab at music-journalism on a free-lance basis while his communications skills were first honed in the advertisement-industry, then as a Business Communicator for important corporations and, since 2011, as a Professional Staff Member with the Nobel peace prize-awarded European Union. He wrote for the Buscadero, Italy's leading rock magazine, for nine years straight and nowadays in a more erratic fashion graces several publications both on- and off-line as his fancy strikes him. In his tenure at Buscadero, he profiled artists as diverse as the Kronos Quartet and Steve Earle with very much all there is to cover in between (John Hiatt, Elvis Costello, Eric Ambel, Dan Zanes, John Mellencamp and Little Steven, to name but a few).

Having married a Frenchwoman, very possibly Francesco's true "piece de resistance", nowadays Francesco is the proud father of two sweet little rock'n'rollers. You could easily run into FC in Brussels, NYC, New Orleans, Paris, Milan or Naples. Shall you spot him anywhere in the globe, buy him a bottle of Château Pétrus and drink it together, he will most likely indulge in anecdotes, music-tales of debauchery and many other interesting stories. Anyway it goes, you are guaranteed a jolly good time.

What follows is a little chat, later rearranged as an interview, occurred between Pete Thomas (the drummer of the now disbanded Elvis Costello’s Attractions) and ...