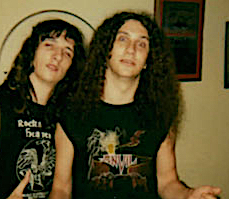 Howard Johnson began his love affair with classic rock when he saw Motörhead at Manchester's Free Trade Hall back in '78. Less than a year later, "HoJo" was producing his own metal fanzine, Phoenix, flogging it in local shops and outside gigs. He began writing for Kerrang! in 1981 and – after a 10-year spell there – went on to edit Metal Hammer and RAW. He has since worked with Iron Maiden's management team, and has also written a book on AC/DC, Get Your Jumbo Jet Out Of My Airport. Howard is the co-founder of Rock Candy magazine, dedicated to classic '70s and '80s hard rock.

WHAT WERE YOU doing ten years ago, huh? Kicking coke cans in the street? Working in a factory? Going to university? Putting on a blazer ...

Are STRYPER the genuine article or is this Christian Rock Band Peace, Love & Understanding stuff just so much holy smoke? After meeting up with ...

The new GIRLSCHOOL album, Nightmare At Maple Cross, may have a tongue-in-cheek terror title, but the record itself, according to HOWARD JOHNSON, is anything but ...

Anthrax: Slammers on the Shore

HOWARD JOHNSON gets among the living Dredd in the Bahamas and discovers ANTHRAX whipping up a sounds-storm with legendary rock producer Eddie Kramer at Nassau's ...

THOSE JOLLY nice chaps from Manowar gave me a credit on their spanking new Fighting The World album as one of 'the faithful', which is ...

EUROPE have a new single on release called 'Cherokee' — the fourth to be lifted from the mega-successful Final Countdown LP — accompanied by a ...

Cliff 'Em All, the low-key, bootleg-style home video from those METALLICA scumbags, has shifted an astonishing 90,000 copies in the States. Now it's finally made ...

Are not what latest American Metal sensations SKID ROW use when doing their tour bus washing up — nor when they're cranking out their particularly ...

"Bon Jovi would just be the best band in the world to play with," says VIXEN bassist SHARE PEDERSEN. Assuming she's talking about gigging and ...