Rick O'Shea is a pseudonym for Ian Ravendale 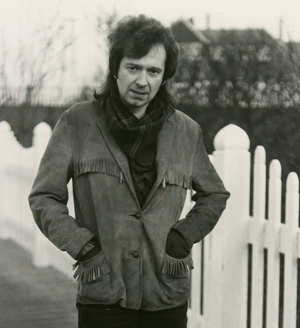 Ian Ravendale began his career in broadcasting and journalism in the 1970's interviewing hundreds of rock stars including Paul McCartney, Debbie Harry, The Clash, Marc Bolan, Kate Bush, Queen and The Shakin' Pyramids for BBC Radio Newcastle and local music mags where he was able to use his real name of Ian Penman as the NME guy of the same name hadn't yet surfaced. Subsequently adding national music journalism to his bag of tricks for Sounds and Kerrang! and features for Radio 1 Ian needed come up with an alternative byline so that bands would stop asking him to put in a good word with Paul Morley. Being the era of Billy Idol and Rat Scabies he toyed with re-branding Himself Ian Neon but ultimately decided on Ian Ravendale, taken from East Ravendale, a small village a few miles outside of Grimsby that hadn't christened any other rock journalists.

Having got the hang of the pseudonym game when writing for the short-lived Pop Star Weekly Ian became Rick O'Shea. He resurrected this later to pen a music column for The Sunderland & Washington Times. Music features for the Northern Echo regional daily appeared under the more sedate Chris Coupar.

Moving into broadcasting full time for ITV, Channel 4, the independent and business sectors Ian has worked on hundred of local and national television and radio programmes including The Tube, Bliss, Get Fresh, The Works, Rock On Saturday and First Edition. He's written a television drama about 1960's pirate Radio, directed music and corporate videos and DVD's and worked with Carol Vorderman, Muriel Gray, Janet Street Porter, Gilbert the Alien and many others.

Always involved in some aspect of the music business including promotions, PR, mentoring, lecturing or consultancy Penman has now re-donned the mantle of Ian Ravendale to write for the colourful monthly music magazines that have replaced the inky weeklies. Included are Classic Rock, AOR, The Word (RIP), Record Collector, Vive Le Rock, Iron Fist, Fireworks, American Songwriter and several online music sites. He still isn't the guy who used to write for the NME.

Dewey talks about meeting at school in London; the pleasures of working with George Martin; deals with the CSN&Y comparisons; on appearing on a David Cassidy album, and refutes the accusations of blandness.

The Sabbath frontman rails against bouncer-on-fan violence; describes his feelings toward the band; explains the stress and fatigue behind the band's break, and voices his frustrations with the recording process.

The lanky plank-spanker in a wide-ranging conversation about politics, phlegm and – after Don Letts drops in – white reggae.

The Punk Poet talks about comic writing versus being a comedian; writing poetry; putting his words to music and his place in the music business.

Messrs. Frantz, Harrison and (mostly) Byrne talk about the early days in NYC, the CBGBs scene, Harrison joining from the Modern Lovers, their first album and its (and their) reception.

In which the band debunk myths, largely spread by Richard Meltzer, about the band's formation; discuss songwriting formulae for success and dispute the latent satire in their music; and talk about the role of producers and, specifically, Sandy Pearlman's relationship to the band.

Ms. Bush talks about parental concerns over her career; about being objective as a writer; images of childhood in her songs, and about sex as a subject (and being a sex object).

The Lizzy front man talks about the current tour; the Live and Dangerous album; his solo plans, and ruminates on the meaning and effects of fame.

Johnny, Joey, Tommy and Dee Dee talk about what got them together; making records; being "Ramones"; playing live, and the true meaning of Gabba Gabba Hey!

Messrs Severin, Morris, McKay and Soux slag off their contemporaries, whinge about their record company, dismiss half their fans and generally have a good old moan.

Ms Hendryx looks back at the formation, encouraged by Vicki Wickham, of LaBelle from the ashes of the Bluebelles; their new image, stage show, and groove. She also talks about going solo and her first album.

The Spider from Mars bass-man talks about his roots (and Rats) in Hull with Mick Ronson and getting together with David Bowie: Ziggy Stardust, glamming up and the end of the band.

The Only Ones: Newcastle Polytechnic

Of serpents and session men ...

IT'S A CHARGE that most of 'em would dispute till the cows come home, but heavy metal fans and heavy metal bands are incredibly conservative. ...

WHO'D BE a rock'n'roll star? The strategy and balance needed to make the thing work to a maximum effect is enough to make the slyest ...

The regal sticksman talks about why they did a live album; 'Crazy Little Thing Called Love'; plans for the next album; their rep for perfectionism; keeping to the original line-up, and refutes rumours of a split.

The ELP sticksman somewhat testily describes the break-up of the band; talks about how UK press criticism meant other members refused to tour the country, and about his new (and it turns out short-lived) band PM.

The Moody Blues' guitarist/singer talks about the current state of the band; about Mike Pinder's departure; his solo work; his association with Jeff Wayne and The War of the Worlds album; the Moodys' live show, and working with 10cc and Lonnie Donegan.

The Feelgoods' frontman on how the band has developed in the studio, choosing producers, and the respective virtues of Mike Vernon and Richard Gottehrer.

The classic Lemmy, Fast' Eddie Clarke, Phil 'Philthy Animal' Taylor line-up talk talk about getting hammered in the press (and the studio!), staying close to their fans, and their friendship with the Damned.

The always interesting art-rocker on Frippertronics and the artist/audience dynamic; his work with other artists (Gabriel, Bowie, Daryl Hall); on production, his Exposure album... and disco!

The fabulously successful songwriter talks about her inspirations (Brill Building, Motown); not wanting to be a performer; breaking into the business, and the artists — from Laura Branigan to Aerosmith — who've covered her songs.

Terry can't remember if his band supported "the New Yardbirds" at Newcastle's Mayfair Ballroom, but he remembers Jimmy Page and manager Peter Grant planning to fill the vacuum left by Cream and Hendrix. He also reminisces about having to turn down Page's offer to become Led Zeppelin's frontman... and instead recommending Robert Plant and John Bonham to Page and Grant.

Iain, Martin and Lauren talk about how the band evolved; the development of their writing style; the influence of '80s electropop; dealing with the focus on Lauren, and the broad nature of their audience.