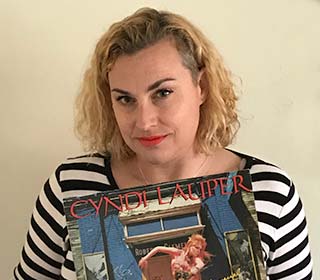 Dr. Jennifer Otter Bickerdike is a media and music academic and author, specializing in fan culture, the cult of dead celebrity, music and music heritage. She has written and presented extensively on fandom and media, using her experience as a former American music industry and Silicon Valley executive to explore a range of societal issues and behaviors.  Jen‘s current project, the #1 charting Why Vinyl Matters, is manifesto about the importance of vinyl as a cultural object, and features interviews with a variety of fans, including Tim Burgess, Henry Rollins and Fatboy Slim. Jen's recent appearances include BBC Radio 6 Music,  BBC 4,Reeperbahn Festival, Channel 4, Bass Guitar Magazine, The Guardian, Manchester Off The Record, Liverpool Sound City, Classic Pop, Long Live Vinyl and Classic Album Sundays.

Originally from California, Jen spent time at a variety of record companies, including Sony Music, MCA Records and Universal Music and Video Distribution before becoming the West Coast Marketing Director for Interscope Geffen A&M Records at 25.  She toured with and devised marketing and branding campaigns for major international acts including Nirvana, Pearl Jam, Rage Against the Machine, Dr. Dre, Gwen Stefani, U2 and Eminem, before leaving to start her own consulting company, working with a wide array of creative industry and technology tastemakers, such as Facebook, Dawbell PR, Music for America, Adeline Records and L.A.M.B., before coming to England to get a PhD in Cultural Studies at Goldsmiths University of London.

After friend Hunter McPherson was murdered in San Francisco, Jennifer decided to quit her job, sell everything she owned and roll the dice on fulfilling a life long dream of living in England.  Her story of transformation was picked from thousands and featured in New York Times best-selling author Marlo Thomas's book, It Ain't Over 'Til Its Over.

Jen is currently the Course Leader for Music Journalism at BIMM London in England.  In 2013, she won the coveted Student Led Teaching award for Most Innovative Lecturer and was short listed for the same accolade on a national level by the Times Higher Education.  She currently juggles living between London, Bude, Cornwall and Santa Cruz, California.

Dr. Bickerdike on the RBP podcast

Smooth, well-produced, meticulously written: Soft Rock had a bad reputation in the DIY '80s and '90s. But today it has renewed relevance. An aficionado explains. ...

HENRY ROLLINS WAS barely out of his teens when he joined the legendary punk band Black Flag. Since parting with the band in 1986, Rollins ...

LARS ULRICH WAS born in Denmark in 1963. After seeing his first concert at age 10, he became enamoured with the drums. His family moved ...

FAT MIKE, BORN Mike Burkett, is an American musician and producer. He is the bassist and lead vocalist for the punk rock band NOFX and ...

Ornette Coleman, Chris Darrow, Nico: All That Is My Own: Nico at Steve Paul's The Scene, October 1967

Book Excerpt by Jennifer Otter Bickerdike, 'You Are Beautiful and You Are Alone' (Faber), July 2021

Excerpted from Jennifer Otter Bickerdike's You Are Beautiful and You Are Alone: The Biography of Nico, published this month by Faber ...