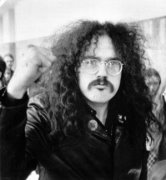 John Sinclair was the manager of the MC5 and the leader of Detroit's White Panther Party. He is the author of Guitar Army and was the editor of Blues Access in the late 1990s.

Art Ensemble of Chicago: Ancient to the Future

A SMALL ARMY of instruments is what you see first – an entire stage full of saxophones, drums, gongs, percussion implements of every description, bicycle ...

I KNOW YOU'RE tired of hearing all the bullshit about the Beatles and all, but there are things going on that nobody seems to be ...

WHEN YOU hear the word "blues" you're bound to think of Mississippi. The phrase "Mississippi blues" leads at once to thoughts of Clarksdale and Greenwood ...

THERE IS no native son of New Orleans more fiercely native than Mac Rebennack, known professionally now for almost 40 years as Dr. John. ...

THE MISSISSIPPI DELTA, that fertile strip of silt-rich land stretching south from Memphis to Jackson on the east and Vicksburg on the river, has for ...

NOW THAT things have cooled down a little for the MC5 and myself after all the excitement of recent weeks maybe I can get into ...

IT'S BEEN MORE than 10 years since Wayne Kramer, Michael Davis and Dennis Thompson took the stage together in Detroit at Rob Tyner's memorial concert ...

A STRANGE polarization (or maybe it's a natural one) seems to be happening with rock and roll fans right now, with white teen-age audiences turning ...

I PROMISED you when I started this column that I'd take you behind the scenes in the rock and roll industry so you can see ...

IN THE past two weeks since the last issue of this paper a bunch of new developments have taken place: Almost every job for the ...

MC5: An Interview with Rob Tyner

Interview by John Sinclair, The Warren-Forest Sun, May 1967

The following interview with ROBIN TYNER, the lead singer of the MC5, the major Detroit avant-rock band, was recorded by JOHN SINCLAIR in the first ...

THERE IS NO way to get at the music without taking the whole context of the music too – there is no separation. We say ...

Here is a typical MC5 program, as performed at the Grande Ballroom in Detroit. As well as serving as notes for "an evening recital of ...

In Britain, the MC5 are now far more popular than they ever were in their heyday – a fact which has prompted the recent re-release ...

MC5: The Story Of The MC5 On The West Coast In March Part One

FIRST I MUST say that this statement, like all statements is bullshit without an active program to back it up. We have a program which ...

THE SKYROCKETING popularity of the premier black vocal groups — the O'Jays, the Spinners, Gladys Knight & The Pips, the Four Tops, Harold Melvin & ...

I KNOW I got something to help people but — I don't know what to do about it. I can put it over in music, ...

Sun Ra And His Myth-Science Arkestra

Sun Ra, and Interview: Collision of the Suns

THE INTERVIEW with SUN RA, the master musician & prophet, was originally taped & edited by John Sinclair in December 1966 for GUERRILLA. The interview ...

Irma Thomas: An Audience With The Soul Queen Of New Orleans

AS HER lengthy reign as the Soul Queen of New Orleans extends into the 21st century, the great Irma Thomas continues to grow as an ...

"In a modern telecommunications society, the radio station is one of the real seats of authority; its seizure the seal of a successful revolution." — ...