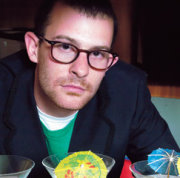 Josh Rinkoff has his own web-site called The Fix. www.thefixonline.com which also e-mails a monthly comedy e-zine to anyone who registers. Josh also DJ's at the Arts Theatre, Soho, London, every Monday (the last Monday of the month being Rock's Backpages-affiliated.) The rest of his time is devoted to making music videos, filming and writing comedy that is yet to be bought by any major TV or film company.

A GOOD FRIEND OF MINE told me about an amazing group called Big Star. He said I should go out and buy a copy of ...

SHAKE HANDS WITH SHORTY, the first album from Memphis band the North Mississippi Allstars, was possibly one of the best releases of last year. ...

MY JOURNEY to this album started about a year ago, when I realised that my knowledge of hip-hop barely extended beyond Snow and Vanilla Ice. ...

Last week I went to the Astoria to see hip-pop miracle-workers-cum-funkmeisters N*E*R*D get down with their bad selves. This week is the turn of New ...

WHITE, BLACK, Jewish, Muslim. Butcher, baker, candlestick maker. They are all here tonight. Where I hear you ask? Babylon? Brent Cross? No. Tonight I ...